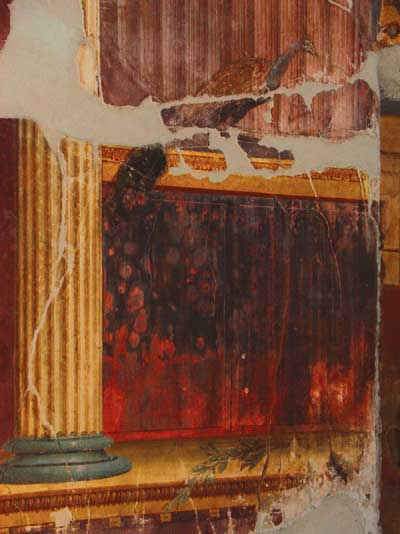 Artists in ancient Pompeii painted the town red some 2,000 years ago. They used a brilliant crimson pigment that dominated many of the doomed city’s wall paintings. However, since excavation and subsequent exposure, the paintings have been undergoing a mysterious blackening. New scientific research is helping to deduce why this is so. A team from France and Italy has been using equipment at the European Synchrotron Radiation Facility (ESRF) in Grenoble (France) to investigate the darkening process and to assess what produces it. The pigment used in Pompeii is made of a mineral known as cinnabar (HgS), which is a cinnamon or scarlet colour. Its darkening is not a new process: already in the 1st century BC, Vitruvius, in his treatise ‘De Architectura’, mentions the problem, which at that time, was prevented by applying a sort of protective varnish based on ‘Punic wax’. However, until the new research, the causes and mechanisms responsible for cinnabar discolouration had remained a mystery. The most common explanation to date has been that exposure to the sun transforms cinnabar into another mineral phase known as metacinnabar, that is a black colour. But because of the lack of clear information, conservators have been unable to prevent the phenomenon from occurring.

To discover more, the Franco-Italian team studied four small samples of darkened wall paint from Villa Sora in Torre del Greco (a Roman villa near Pompeii). The experiments at the ESRF needed a minute, yet intense, light beam to detect low concentrations of elements and to provide detailed chemical information.

As reported in the journal Analytical Chemistry, the experiments revealed that the chemical composition in the altered pieces was completely different from metacinnabar and that important chemical reactions had taken place in the various samples. Thus the scientists found that the cinnabar had reacted with chlorine – from some marine source, and possibly from the ‘Punic Wax’ – which led to the formation of grey chlorine-mercury compounds. In addition, a natural chemical process known as sulfation had occurred in the calcite, resulting in the development of black coating on the painting surface. The scientists looked further and investigated the cross-section of one of the samples to map the depth of alteration of the painting. They found that this darkened layer was only around 5 microns thick and that underneath the cinnabar stayed intact. So what makes the red turn into black so quickly after exposure by archaeologists? Marine Cotte, the first author of the paper said that in addition to the unstable chemical distribution of the samples ‘atmospheric conditions [sun, and possibly rain] probably play a role in this change of colours’. She added ‘Atmospheric contamination or bacterial activities can also contribute to sulfation mechanisms’.

The new research carried out at the ESRF is of major importance for future methods of preservation of Roman wall paintings at sites such as Pompeii and Herculaneum. However, it is still early days and this research is ongoing: ‘The next step is to examine more samples and not only from frescoes in the archaeological site but also from those in museums. In this way, we will be able to compare the results and better establish the causes for their degradation’, explained Marine Cotte.