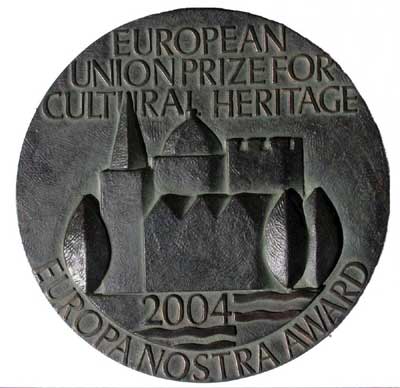 The judges chose the German team because of their innovative interpretation of an ancient and important battlefield at Kalkriese near Osnabrück, and because of their laudable decipherment and presentation of scant remains based on interdisciplinary scientific research.

The battlefield at Kalkriese was the site of a decisive event in European history: the AD 9 Varusschlacht – Varus being the ancient Roman leader, and ‘Schlacht’ meaning battle in German.

Its investigation has provided an opportunity to examine conflict between the Roman Empire and the native populations north of the Roman frontier. The Romans, led by General Varus, were utterly defeated by the German hoards who destroyed three Roman legions and put an end to the Roman invasion of Germany.

This meant that Germany remained henceforth outside the Roman Empire whose borders were now fixed on the Rhine. This, so some argue, has contributed to the cultural division and diversity of Europe.

The site of this decisive battle has been under continual archaeological and scientific research since 1989. Over this time, a mighty 20,000m sq has been excavated. The archaeological evidence for the battle, which includes a 400m long rampart and over 4,000 fragments of Roman military equipment, covers an area of almost 50km sq.

In April 2002 a new museum and a park were built and opened to the public. In contrast to other archaeological open-air museums, the Kalkriese project deliberately chose abstract representation, using metaphors and symbols. The team wanted to avoid detailed pseudo-authentic attempts at reconstructions of the place or event. Rather, visitors are guided through a wealth of archaeological evidence and interactive multimedia displays that couch the latest results of research in terms of a detective story that sets out to answer the key question ‘What happened in Kalkriese in 9 AD?’. Innovatively, visitors are encouraged to participate in the scientific process and even in excavations. In addition, there is a broad range of exhibitions and educational activities for adults and children alike.

Readers interested in visiting the park and museum can find out more at www.kalkriese-varusschlacht.de; and for more information on the European Union Prize for Cultural Heritage / Europa Nostra Awards go to www.europanostra.org.

Previous Bahrain Next KV5 – Largest Tomb in Valley of the Kings