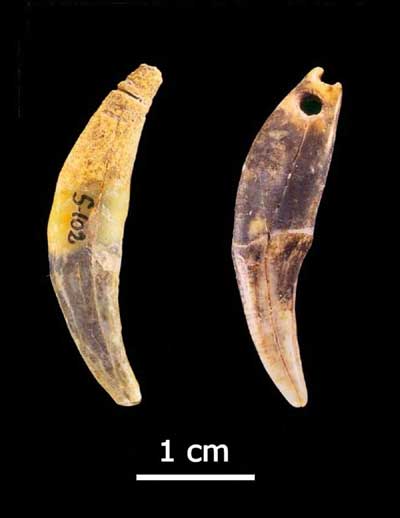 Neanderthals appear to be shaking off their, well, Neanderthal image. According to a re-examination of finds from the Grotte des Fées at Châtelperron (central France), one of the most famous Palaeolithic sites in Europe, Neanderthals were much more like modern humans than had been previously thought. Bristol University’s Professor Zilhao and colleagues from France have concluded that sophisticated artefacts – such as decorated bone points – found in the Châtelperronian culture of France and Spain, named after the Grotte des Fées, were the work of Neanderthals around 44,000 years ago.

The archaeologists have revisited the evidence from the Grotte des Fées site, first excavated in the 1840s. This cave, one of the most important and controversial sites in the story of how modern humans came to replace the Neanderthals, has evidence of both modern human and Neanderthal occupation in interleaved layers. Traditionally, based on analysis of the strata at the cave, it was understood that the Neanderthals came back to occupy the site after anatomically modern humans had lived in it for quite some time. This came to prove the long-term contemporaneity of the two groups. Thus, any cultural novelties – such as decorated bone implements and personal ornaments – found in the latest Neanderthal levels of several sites in Italy, France, Belgium and Germany were understood to have simply been acquired from modern humans living nearby, or to represent borrowing or imitation, but certainly not innovation. This fuelled the fire that Neanderthals were cerebrally ‘primitive’ beings.

Now, Zilhao and colleagues have shown that the Grotte des Fées stratigraphic pattern is illusory. In fact, the Neanderthal levels supposedly overlying those belonging to the anatomically modern humans are adduced to be backdirt from 19th century fossil hunting. According to Professor Zilhao and his team, hand-crafted items (such as the flint ‘Châtelperron points’ typical of the Chatelperronian) found in the backfill therefore predate the appearance of anatomically modern humans at the site. Their conclusion adds to evidence from other sites in the region that indicates Neanderthals had the capacity for symbolic thinking before the arrival of the modern humans in western Europe (an event radiocarbon dated to around 40,000 years ago).

Consequently, the team is able to suggest a higher level of cognitive ability in the Neanderthals than had previously been generally assumed.

Professor Zilhao said: ‘This discovery, along with research on the rock strata at other cave sites, has huge implications for how we view the European Neanderthals and, more widely, human evolution. We are beginning to think that the differences between Neanderthals and modern humans may be much less than had been previously thought.” He added “the fact that both anatomically modern humans and Neanderthals had the capacity for human cognition and symbolic thinking suggests the origins of such mental abilities may date way back to before the two species split from their common ancestor – somewhat under half a million years ago.”