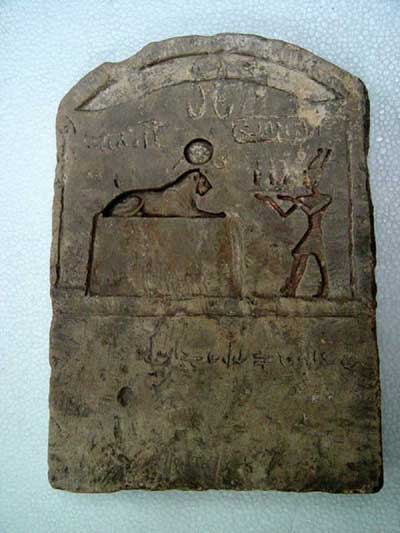 Three years ago, Professors Willy Clarysse and Yan Haiying found some Egyptian funerary stelae with hieroglyphic texts in the Museum of Peking University, in Beijing (former Peking). These items were registered under the name of Duan Fang.

This sparked a search for the rest of a collection known to have been bought in Cairo in 1906 by Fang.

Though Duan Fang was a collector of antiquities, he was best known for his position as an important member of the imperial court. Indeed, he was the head of an embassy of the last Chinese emperor in Europe and the US. However, in 1911 Fang was murdered by his own troops. Thereafter, his collection was bought by the Chinese government. Yet, with the passing of time, a large part of it disappeared.

Now, a team led by Clarysse of the Catholic University of Leuven, and Yan Haiying of Peking University, has found scores of Egyptian works of art from Fang’s collection. Some had been totally unknown, while others were considered lost.

Among the objects is a 2000 year old wooden sarcophagus adorned with the gilt head of a lady – a musician of the Egyptian god Min. There are also some stone slabs thought to have come from a tomb in Saqqara, constructed a few generations after the building of the pyramids. But perhaps most striking is a limestone stela showing queen Cleopatra offering to a lion god. Cleopatra is represented as a male pharaoh, bearing witness to her power. This is a highly exceptional find since only two other similar examples are known to date.

Most of the other objects uncovered by the team are very exact copies in cement or precise charcoal rubbings of other decorated stone slabs – the quest for the original stones goes on. However, the copies are so skilful that from a scientific point of view, they are nearly as valuable as the originals.

Finally, the team has also discovered some letters that Ambassador Duan Fang brought over for Emperor Guangxu. These include missives written by American and European notables, including the Belgian king Leopold II. They remained unopened in the imperial archives until now, and will certainly throw new light on the (failed) attempt of the last Chinese emperor and his court to adapt to the western style of government.

As Prof. Clarysse told CWA: ‘The artefacts span an extremely long time span and therefore represent a very important collection. Duan Fang must really have been an extraordinary man to assimilate all this material’.