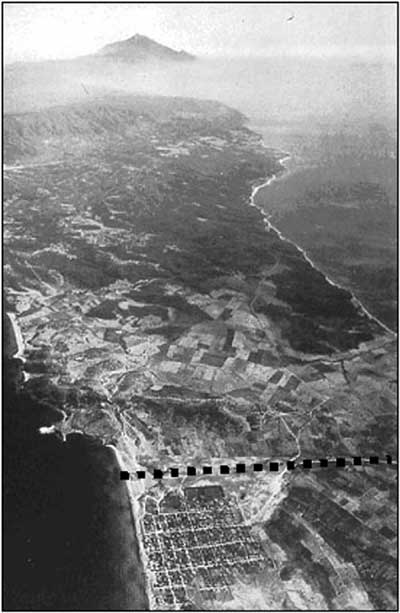 Many ancient writers, notably Herodotus who provides the lengthiest description, take great interest in Xerxes’ waterway. This unique monument of ancient Persia’s brief rule over northern Greece was apparently created across the Mount Athos peninsula. Xerxes ordered the canal’s construction as part of the preparations for his intended invasion of Greece in 480 BC. It is said that he hoped to avoid a repetition of the disaster some twelve years previously when the Persian fleet was destroyed by storms when rounding the Mt Athos peninsula.

In Book VII of his Histories, Herodotus provides a further motive: that Xerxes ordered the canal to be dug out of a sense of arrogant grandiosity – he wanted to show his power and leave a memorial.

Herodotus, dubbed the ‘Father of history’, is sometimes called the ‘Father of lies’, so how reliable is his account? Surely it would have been an impossible undertaking, given the lack of basic construction aids? However, the Persians were impressive engineers: besides roads, there were bridges, including the double one of some 1300m across the Hellespont.

Since excavation was not an option for what would in all likelihood be a deeply buried structure, our team, consisting of scientists and archaeologists from Greek and British research institutions, resorted to geophysical and topographic survey and bore-hole drilling. In the course of mapping the area, it was soon established that the middle part of the isthmus lies at 15.7m above sea level, and so there must have been a cutting at least this deep at this point.

Using a variety of geophysical survey techniques, we took a series of seismic refraction and reflection measurements which were most revealing. These readings provided decisive evidence of the canal’s existence in the central sector of the isthmus where its depth was estimated to be 14-15m below present ground surface, with top and bottom widths of 25-35m and at most 20m, respectively.

This model agrees remarkably well with Herodotus’ account of the canal. Furthermore it is reinforced by the results of drilling in the same area: for over 10m there were several layers of silts washed in as hillwash at different times since antiquity, but at a depth of c. 14.5m there was a marked change as solidified sandy ‘red beds’ appeared. (‘Red beds’ refer to the clay that formed the solid base of the canal, whereas the silts above were the later silting.) The absence of marine indicators, such as shells, in these core sediments hints that the canal’s direct links with the sea were limited in duration.

So what does this all tell us? First, there was indeed a canal. But once Xerxes’ fleet had passed through the canal, it probably fell rapidly into disuse. The depth of water in the canal was probably only a few metres. Finally as seen in the illustration right below, our seismic survey in the northern part of the isthmus, and at the southern end, indicates that there would have been no physical obstacle to its construction. Therefore it is highly unlikely that there was any slipway from the coast for 200-300m inland. The riddle of Xerxes’ canal has finally been solved – and on this occasion at least, we can see that Herodotus was very far from being the ‘Father of lies’.