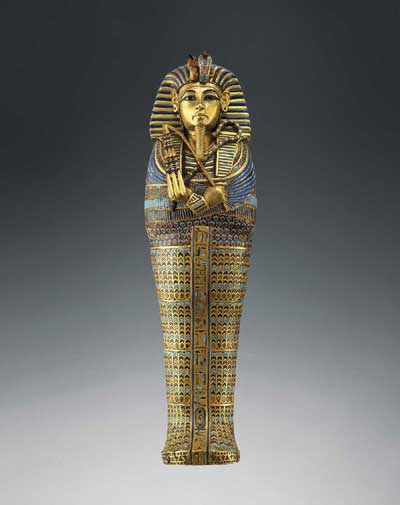 Tutankhamun is back. A blockbusting exhibition of objects from his tomb is currently on tour in the US and is due to come to the UK in the Autumn. The show, entitled Tutankhamun and the Golden Age of the Pharaohs, is now at its fourth and final American venue, The Franklin Institute in Philadelphia. Peter Harrigan, editorial director of Barzan, the publisher of Winstone’s biography of Howard Carter, reports.

Treasures from Tutankhamun’s Tomb have not left Egypt for the USA since 1976 when a three-year, seven-city tour attracted a staggering eight million visitors breaking all previous touring exhibition attendance records. I saw the exhibition this autumn at its third venue: Chicago’s Field Museum. Numbers – in the order of a million visitors over seven months – have again well exceeded expectations. Meanwhile, well over one million are expected to visit the Franklin Institute in Philadelphia over its nine month run.

An additional 70 pieces will be on display representing royals of the New Kingdom, a period of Egyptian history evocatively known as the ‘Golden Age’ (1555 – 1305 BC). Object from other graves of the 18th dynasty include those of Amenhotep (Amenophis) II, Thutmose (Tothmosis) IV and the tomb of Yuya and Tjuyu, the only intact burial found in Egypt before or after Carter’s incomparable discovery.

While previous shows focused mostly on the story of the tomb’s discovery, this exhibition places Tutankhamun in his own time, revealing the art, politics, religion, and culture of his era. For example, by including items from the tombs of Tutankhamun’s relatives, the show sheds light on his family’s dynasty and their role in bringing Egypt to its artistic and military summit. This exhibition takes museum visitors beyond just the shimmering gold.

I found the forensic aspect particularly interesting. Thanks to a sophisticated 3D X-ray of Tutankhamun’s body (presented in November 2006 at the annual meeting of the Radiological Society of North America) an international team of scientists concluded that King Tutankhamun’s death was caused not by murder by a blow to the head, as had previously been suggested, but rather, he may well have perished because of a badly broken and infected leg. “There was no evidence of violent premortem trauma to the skull,” said Dr Ashraf Selim a radiologist from the Cairo University in Egypt. “But there is a possible femoral fracture that may have led to his death.”

Not to be outdone, New York has also jumped onto the Tut bandwagon. “Mummies in Manhattan,” trumpeted a New York Sun headline. The reason? The city’s Metropolitan Museum is staging a photographic exhibition Discovering Tutankhamun: The Photographs of Harry Burton (until April 29, 2007, www.metmuseum.org) at the Museum’s Howard Gilman Gallery.

Despite the boon Tutankhamun is bringing to America, Egypt is also seeing the benefits. Figures reveal that the number of US tourists to visit Egypt have increased by 20% as a direct result of the media and public exposure generated by the Tutankhamun exhibitions. In addition, some of the proceeds from the tour of this exhibition will go to support the construction of the Great Egyptian Museum, to be built near the pyramids at Giza. This new museum will contain most of the collections from the Cairo Museum, which can now display only a limited number of the artifacts in its vast collections.

Meanwhile for those in the UK who wish to explore Howard Carter and Tutankhamun outside the obvious museum venues in London, there are two intriguing and educational venues in the provinces.

Although he was born in London, Howard Carter was brought up in Swaffham in Norfolk (where his parents were born). Here, less than two miles from his home, a new exhibition dedicated to him and the story of his life will be on show from April 2007 at the Swaffham Museum.

John Clarke is chairman of the Friends of Swaffham Museum and he explains that there will be two rooms. One is devoted to Carter and his life; this will lead visitors to the moment when he first looked through the wall in the tomb of Tutankhamun to see the “wonderful things” referred to so many times in the literature. “Visitors will have the opportunity to peer through a recreation of the hole through which both Carter and Carnarvon jostled to view the treasures for the first time”, explains Clarke. “We don’t of course have any genuine artefacts, but we will present an interactive set of exhibits which bring Howard Carter to life, and make his achievement more vivid to ordinary visitors to the Museum,” he adds. The Howard Carter story at Swaffham will also include a BBC sound archive recording of Carter in which he describes the moment of discovery.

In addition, in the centre of the Dorset market town of Dorchester is the Permanent Tutankhamun Exhibition, a spectacular recreation of Tutankhamun’s tomb and treasures. The exhibition attracts school visits from around the country as well as holidaymakers over the busy summer months. Since Egyptology became part of the national curriculum there has been a steady rise in educational visits to the permanent exhibition.

The Dorchester Exhibition has been quick to include and comment on the latest developments on investigations into the cause of death of the Boy King. The results of the investigation together with x-rays and images from the CT scan are now on show in a special display.

But controversy remains on even the latest findings. Michael Ridley, director of the Tutankhamun Exhibition in Dorchester, said that although it is now clear that earlier investigations on the mummy have produced misleading evidence, the full truth of how and why Tutankhamun died may still have to be decided. “The results of the examination of the mummy put a different perspective on Tutankhamun’s death. It is evident from Dr Selims’ work that Tutankhamun’s leg suffered a fracture but what we cannot be sure of is when that fracture, occurred. What is being suggested is that he fractured his leg and the wound turned septic and killed him. However, there is no evidence to show that the wound turned septic only that the leg had been fractured. It is possible that the fracture may have been postmortem incurred in the handling of the body by the ancient Egyptian embalmers – we just don’t know, So the mystery of Tutankhamun’s early death still remains”.