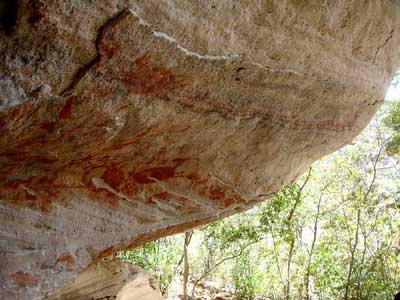 Set within treacherously steep cliffs, and hidden away in the secluded valleys of northeast Brazil, is some of South America’s most significant and spectacular rock-art. Most known art comes from the archaeologically-important National Park of the Serra da Capivara in the state of Piauí, and it is causing quite a controversy. The reason for the uproar? The art is being dated to around 25,000 years ago, while a small number of eminent rock-art specialists are proposing an even earlier date – perhaps as far back as 36,000 years ago. If correct, this is set to challenge the widely held view that the Americas were first colonised from the north, via the Bering Straits at around 10,000 BC, only moving down into Central and South America in the millennia thereafter (a model known as the Clovis First Theory, after the ‘Clovis-tradition’ stone tools used by these settlers). So what is this contentious art and why is it being given such an ancient date?

Prior to the area’s designation as a National Park, the rock-art sites were difficult, and often dangerous to enter. In ancient times, this inaccessibility must have heightened the importance of the sites, and indeed those who painted on the rocks. This ‘perilous’ art tends to be painted in various shades of red using ochre (haematite), which naturally bleeds from the surrounding exposed rock outcropping; though occasionally yellow (limonite) and grey pigments were also used. Each panel (or canvas) usually takes the form of a long linear block of images, arranged about 0.5m to 2m above the original floor, and extending some tens of metres long. Occasionally, the panel fills the whole length of the naturally formed rock-shelter or overhang. Most images appear to be strategically placed, usually within natural depressions, either cutting into the rock surface or in eroded hollows.