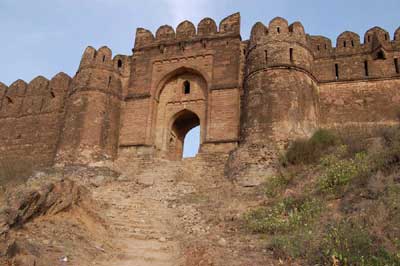 The Fort at Rohtas, near the modern town of Jhelum in northern Pakistan, is one of the largest and most formidable forts in the Indian sub continent, yet it is one of the least widely known. The perimeter is over 5km long but it was built in only 20 years and was then abandoned. Yet why was Rohtas Fort built with such magnificence and why was it then deserted? And where are the houses in the interior in which the rulers of this magnificent fort must have lived? To answer the first of these questions we must take a quick look at the story of Moghul India; to answer the second we must look at the latest archaeological excavations.

From the 16th century until their gradual replacement by the British, the Moghuls – who were basically Turkik Muslim invaders from the north – dominated India. Their Kingdom was first established in 1526 by Babur the Lion, who has been compared to what Henry VIII could have been if only he had fulfilled the promise of his youth. Babur took control of most of Northern India, but on his death he passed control to his eldest son Humayun. Humayun inherited only some of his father’s characteristics. When he bestirred himself he was as formidable a warrior as his father, but he believed that there were other things in life to fighting, and rather than consolidating his empire, he tended to devote himself to wine, women and the pipe with some interest in astronomy.

The splendid defences of Rohtas still survive, complete with 12 gates and 68 ushaped bastions. Some of the gates were magnificent. The finest is known as the Sohail Gate, protected by two huge bastions on either side: it must have been the main ceremonial entrance to the fort. The most interesting gate however is that on the North side, known as the Kabul Gate, facing towards Kabul, the capital of Afghanistan. This would appear to have been built in two stages, for outside the gate is a very extensive projecting fortification which encloses a very large and elaborate well. The gate itself is magnificent enough, but as it is preserved today, it would have been useless as it is made redundant by the fortifications projecting in front of it – unless indeed it was designed as a double defence. The well is huge, though a little strange in construction. It is a large circular well but round the outside a broad staircase leads to a doorway, half way down to a well. At the sides there are smaller rooms which, it has been suggested, may have been bathrooms for the Imperial family.

There are indications that the fort was originally designed to be somewhat smaller – a mere hectare in extent – but it was then extended with a huge outer court. The wall between the two was partly demolished, though in places it still survives and it is not clear whether this is in fact a two-stage construction or whether it was built as an inner and outer bailey from the start.

The wells imply that there was also a resident population, but where were they? The most obvious answer lies in the north-east corner of the site – around the building known as Man Singh’s Palace. Here are two separate towers, linked by a wall. One of them is approached by a modern staircase, by which it is possible to view the balconies that form the upper storey of the tower, providing a view over the whole of the fort: perhaps it served as a watch tower. But are the two towers linked? Do they form part of a palace? And if so, what is their date? The palace is named after Man Singh, who was one of Moghal Emperor Akbar’s generals (d.1614): did he really build the palace, or did he merely give his name to an earlier construction? To solve some of these problems, excavations are taking place around the foot of the tower, revealing that originally it had been part of a more extensive building: will more be discovered? And what was its date?

Following Sher Shah Suri’s death in 1545, his empire fell apart. His sons proved even more incompetent than some of the Moghuls, and surprise, surprise, Humayun roused himself from his lethargy and made a come-back and once again established the Moghuls as the rulers of northern India. He was fortunate in his son, Akbar. It was Akbar who, despite being totally illiterate (unlike both father and grandfather for during his father’s wanderings he had had no schooling), established the Moghul rule and became known as Akbar the Great. Sher Shah Suri’s other great memorial is his mausoleum, erected 800 miles away in eastern India, at Sasaram, a five story edifice set in the middle of a lake that was to foreshadow much of the glories of Moghul architecture. In another respect too he foreshadowed Moghul success: formidable warrior that he was, Sher Shah Suri was even more efficient as an administrator, and his success in separating the Indian peasants from their surplus provided the Moghuls with the economic basis for their later imperial and architectural glories. One of Sher Shah Suri’s abiding glories is the great highway, some 1500 miles long, that he built from Calcutta in the east to Peshawar in the west, with inns located every 12 miles apart, and shady trees all the way – which still survives and is called the Grand Trunk Road of the subcontinent.

Akbar, however, was not interested in Rohtas. And in any case, the fierce tribe of the Gakkhars, against whom Rohtas was built, were friendly to the Moghuls. Rohtas was abandoned. In the late 18th century it was briefly re-garrisoned by the Durranis in their short-lived empire in North India, but their successors, the Sikhs then abandoned it. Eventually in the 20th century it fell under the eagle eye of Sir John Marshall, the first Director General of Archaeology in India, who patched it up, and finally in 1975 it was scheduled as an ancient monument and a part of it has been designated by UNESCO as a Heritage of Mankind site. However, it still remained remote and unvisited as access was difficult, and visitors had to ford a river to get there. But now a bridge has been built over the river and Rohtas is once again able to display its mysteries to the enterprising tourist. All that now remains is to find something more of the buildings that must surely exist in the interior.