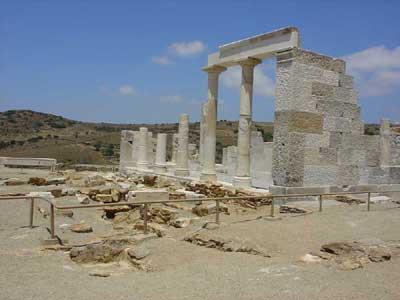 The temple of Lygdamis standing at the entrance of the harbour of Naxos is a well-known site to visitors – see photo of front cover above. Recently however three further temples have been excavated on the island.

Sangri or Iroulas
At the farmstead of Iroulas, near Sangri, in the centre of the Island, a large temple originally built around 530BC was later incorporated into a Christian church. The church was later abandoned and thus nearly half the temple can be reconstructed from the original markers .

Iria, or Hyria.
At Iria or Hyria 3 miles south of the town of Naxos, another archaic temple has been reconstructed. This was originally built around 570BC but this was the latest of 4 earlier temples on the site going back to the Mycenaean period. The foundations of a banqueting hall were also excavated near the entrance and an ancient grove has been re-planted.

In Naxos town itself an underground museum has been constructed at the centre of the former Greek town in the square opposite the orthodox cathedral. Here just inside the ruined Mycenaean walls several offering temples were erected between the 7th and 10th centuries BC where offerings were made to previous heroes. These offering tables were later preserved under an extensive barrow.