Kerkouane, Secrets of the Carthaginians revealed 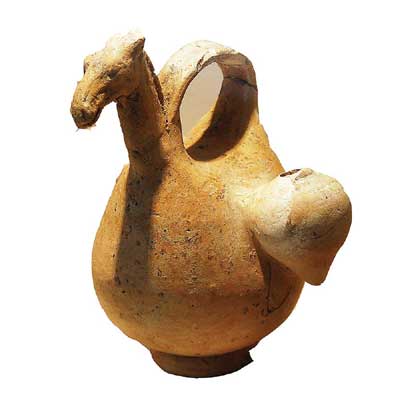 Kerkouane, on the tip of Cap Bon in Tunisia is one of the most extensively excavated of all Carthaginian settlements. What did it look like, and how did the ordinary Carthaginian live? Andrew Selkirk, CWA’s editor-in-chief, visited to discover more.

One day in 1952, Charles Saumagne a member of the French Department of Antiquities in Tunisia was indulging his great love of fishing along the North Coast of Cap Bon.

Happening to turn round, he noted some sherds of pottery projecting from the low cliff behind him. He immediately recognised it as being Punic, the pottery used by the Carthaginians before they were conquered by the Romans. He explored further and began finding lots and lots of sherds of Punic pottery projecting from the cliff over a considerable distance. Since Punic settlements are little known – the site of Carthage itself is notable for its fine Roman remains – it seemed that this new site at the far end of Cap Bon must form an extensive settlement.

In the following years, test trenches were laid down over the area which confirmed the existence of a substantial settlement. Then in 1956 Tunisia gained its independence and the newly formed Tunisian Archaeology Institute decided to turn Kerkouane into a major excavation project. Unemployment at the time was running high, and so special public works programmes were launched, revealing a Punic town spread over close to 9 hectares, though part of it had clearly been already washed away by the sea. Kerkouane has become the largest known Punic settlement and is now a World Heritage site, splendidly laid open to visitors with one of the best archaeological book shops in Tunisia.

But what did a Punic settlement look like? It was a large settlement of wide streets and well-built houses. However, there are few grand buildings. It is always possible that the ceremonial centre has been devoured by the sea. There are a couple of open areas and there is one house that is labelled as a temple, but it appears to have been combined with a potters’ workshop.

The main impression is of wide streets, with houses on both sides which come in a variety of forms. The grandest is a peristyle house that would not be out of place in any Greek settlement, with a central courtyard surrounded by columns. Another has a fine floor of red concrete with white stones inserted in opus tesellatum (mosaic style); in particular in the threshold to one of the rooms, the stones have been arranged to form a sign representing the goddess Tanit – see image below left. Some of the houses were arranged round an internal courtyard; in others the rooms were laid out in a line entered from a central corridor. But perhaps the most remarkable feature of the whole settlement is that so many of the houses appear to have elaborate small baths made from red concrete – bathing appears to have been an important part in their lives: can a distinction be made between the Carthaginians who preferred to bathe on the small scale in the privacy of their own homes, and the Romans who preferred to flaunt their nudity in public in the public baths? Kerkouane lies at the end of Cap Bon, the large peninsula that projects into the Mediterranean, and forms an excellent harbour for Carthage in its sheltered recess.

(Geologically it is said to be the furthest extremity of the Atlas Mountains.) But the tip of Cap Bon is a wild area with rough seas, and there is no sign of a harbour at Kerkouane: even though the sea side is washed away, it is difficult to see that there could ever have been any good natural harbour. There is said to have been evidence for fishing, and the production of purple dye from the murex fish.

The town had elaborate defences with a stout wall to the north; indeed there appears to have been a double system of walls – or it this evidence for two periods of construction? The earliest evidence for a town appears to go back into the 6th century BC – there are some examples of Greek black figured pottery. But it appears to have been destroyed presumably by the Romans, in the third century BC, perhaps at the time of the destruction of Carthage. The site was then completely abandoned, and – fortunately for the archaeologists, forgotten – there is no sign of later stone robbing.

Its position means that it is rather off the usual tourist beat, being at least a two hour drive from the main tourist resort of Hammamet and the main motorway, but it is fascinating to see how the Punic peoples lived prior to the Roman Conquest. There was inevitably a certain amount of Greek influence but these appeared to be an industrious, commercially minded people, with few grand public buildings, but concentrating their wealth and their efforts on their own very substantial houses.