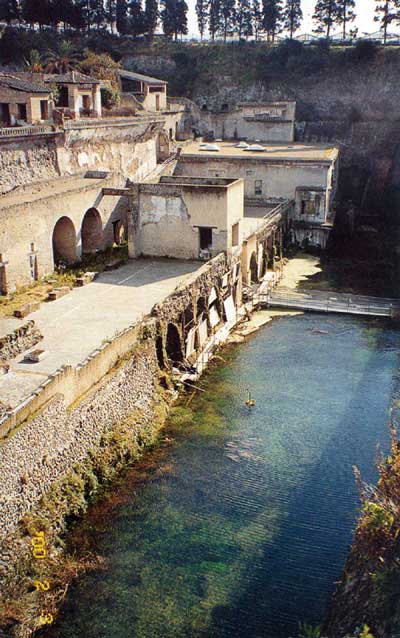 The exceptional preservation of the Roman seaside town of Herculaneum has long been recognised, although it is often overlooked in favour of its sister site Pompeii, which, with approximately two million ticket sales a year, is Italy’s most visited attraction. But it was actually Herculaneum that was the first Vesuvian site to be discovered in 1709 and its finds had a deep impact on European culture, influencing the neoclassical movement and the Grand Tour generations. History has it that the site was discovered by a local farmer digging a well, but the sheer wealth of statuary and other artefacts that were revealed soon brought it to the attention of more influential people: at first the Prince d’Elboeuf organized excavations there, and some years later it passed into royal possession when the Bourbon king Carlo III became interested. It was only when it was realised that Pompeii could be uncovered more quickly and easily, due to the different way Vesuvius had destroyed that city, that emphasis shifted away from Herculaneum to Pompeii. However, Herculaneum continued to be of national importance into modern times, excavations being sponsored by the first king of Italy shortly after its unification, and most noticeably under the Fascist regime, when along with many other Roman sites, further work was funded by Mussolini in an attempt to recreate the glory of the Roman empire. Interestingly in each of these periods it was understood that the archaeological remains that were uncovered needed conserving, particularly in the latter period when archaeologist Amedeo Maiuri, who worked on site from the 1930s to the 1960s, also directed maintenance works which preserved the site well until recent years.

The fundamental difference between Herculaneum and Pompeii is the manner in which they were destroyed in the eruption of Vesuvius in AD 79. While Pompeii was drowned in a relatively light covering of volcanic lapilli, Herculaneum is a site carved out of 20m deep volcanic material that has petrified over time. These differences are due to the relative positioning of these ancient cities to the volcano, as the various volcanic episodes travelled in different directions. Herculaneum was initially hit by a column of gas and pyroclastic matter, that at first shot vertically upwards to a height of 30km before collapsing down and moving towards the town at a temperature of 500°C. This killed the inhabitants of Herculaneum instantly and carbonized other organic materials, but recent research has shown that it had very little physical impact. The second surge, at 30m per second, had a bigger force and demolished buildings; it was the following surges which were eventually slowed by the urban layout and infiltrated the city and filled its buildings and rooms.

However as on every archaeological site, once an area has been uncovered it begins to decay immediately unless a programme of ‘continuous care’ is in place. It is a phenomenon that sadly affects so many trenches once the excavator has finished – only in this case the trench is 60,000 square metres large and 20m deep and full of vulnerable decorative surfaces and organic material. Many of the houses in Herculaneum have been shut to the public as they are structurally unsound and need propping with scaffolding. Other areas have mosaic floors where the tesserae have come unstuck and are scattered around; there are frescoes that are not only cracked but are covered in salts leached from the walls and that in many areas crumble off completely. Carbonized wooden furniture that was documented in the original excavation campaign can be found as piles of powder. Pigeons have been seen roosting throughout the site leaving acidic guano on decorative features and they peck away at carbonized wooden beams until they disappear. These processes of decay are natural phenomena and affect every object and living being, but it is important to remember that they can be slowed down and controlled.

When Dr David W Packard of the Packard Humanities Institute, accompanied by Professor Andrew Wallace-Hadrill, director of the British School at Rome, saw what was happening on a visit in 2000, they resolved to launch a project to save the site, and with the support of the local heritage agency, the Soprintendenza Archeologica di Pompei, a formal collaboration was started in 2001.

So under this new system, what does the Herculaneum Conservation Project do? It has two aims: firstly it recognises that the current state of decay on site is so serious that action is needed immediately. As a result teams move constantly around the site intervening in order to arrest decay and reduce its causes. This involves propping up collapsing walls, consolidating crumbling wall paintings, preventing mosaic tesserae from scattering, discouraging pigeons from nesting in the houses, and a great deal more. The aim is to stabilize the site and turn the campaign into a maintenance programme of ‘continuous care’, which has been lacking at Herculaneum in recent decades and has led to the site’s terrible state of decay today.

In parallel to the emergency campaign, the second aim is to develop a conservation plan of long-term solutions for the preservation of the site. A case study on one block of the ancient city (the Insula Orientalis I) is being carried out to understand these issues better, and involves looking at problems of water infiltration, drainage, roofing and problems of reconstruction, structural instability, incomplete excavation, presentation to the public, collection of documentation in a database, maintenance of new structures, etc. Lessons learnt can then be applied across the site.

These aims are ambitious, but the most important feature of the project is that the team has been brought together from a range of disciplines – archaeologists, conservatorrestorers, architects, engineers, IT specialists, builders, academics, etc. Each group is given distinct tasks to carry out, and there are regular site meetings where the group exchange information: many of the initiatives require mutual support within the team. For example, archaeologists ask the conservator-restorers to come and assess any new trenches they may dig so as to tackle decay right from the start; engineers studying the site’s drainage system may ask assistance from archaeologists to clear out ancient sewers in order to evaluate their modern usage; conservator-restorers ask architects to ensure the stability of the walls and floors supporting frescoes and mosaics; IT specialists start dialogues with each of the other disciplines in order to find out what exactly they might find useful from a database; the scientific coordinator asks for the cooperation of all the team when organizing visits from interest groups, planning outreach initiatives or publishing team results. This dialogue has included Soprintendenza colleagues from the start so that a close relationship has been built up with them, ensuring that the project tackles the site’s most urgent needs.