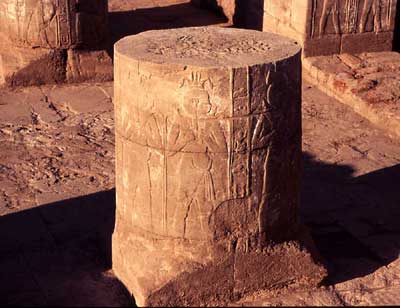 In 1997, we began archaeological reconnaissance in the region around Dangeil, an area just south of the Fifth Cataract of the Nile, approximately 350km north of Khartoum. Dangeil is an important crossroad, situated at the hub of ancient and modern trade routes connecting the life-giving Nile with the eastern and western deserts and the Red Sea to the east. The sharp rocks and rapids of the Fifth Cataract form a physical boundary that restricts travel along the river, and which, in the past may have defined other borders: the southern-most limit of the Ancient Egyptian empire was a rocky outcrop called Hagr el-Merwa, located just north of the Fifth Cataract, while the great Late Kushite royal city of Meroe is situated just upstream of the cataract, to the south. As throughout much of Sudan, archaeological work around Dangeil has been limited. Vital clues and teasing hints were provided in 19th and early 20th century AD reports made by members of the Turkish army and early travellers, mentioning archaeological sites in the area.

Key sites around Dangeil include a large fortress dated to the 4th-5th century AD, and an extensive tumuli field of the same date, extending over 3km and containing several hundred burial mounds. One of the most outstanding and substantial archaeological sites in the area is a Late Kushite city (3rd century BC – 4th century AD) situated within the modern village of Dangeil. However, it is under threat from the expansion of the surrounding modern community and neighbouring agricultural projects. This city has therefore become the recent focus of our research. Late Kushite culture, as represented by Dangeil city, exhibits a rich mixture of Pharaonic, Graeco-Roman and indigenous African characteristics. This richness is related to the broad cultural contacts of the Kushite Empire. Throughout its existence (9th century BC – 4th century AD), the empire maintained close relations with Egypt, but at its zenith, in the 8th century BC, its dominion stretched from the borders of Palestine possibly as far as the Blue and White Niles and united the Nile valley from Khartoum to the Mediterranean.

The Lake Kushite city of Dangeil

With several large individual mounds, rather than a single mound, Dangeil city has an unusual appearance that has puzzled modern archaeologists. Many mounds stand over 4m high. After excavation we discovered that each mound was in fact an individual, well-preserved building. The site of Dangeil city has no parallel in Sudan.

Our excavations began on one of the large mounds, known as Kom H, in the centre of the site. Initially, we uncovered a red brick surface, which we thought to be a floor; however, it was quickly realized that we were in fact standing on the uppermost part of a building.

We had, in fact, revealed one-half of a huge redbrick pylon gate belonging to a previously unknown temple to the god Amun. The origins of this ram-headed god are obscure, but he was an important creator god in both Ancient Egypt and in the Sudanese Kushite kingdom and he bestowed the mantle of kingship upon the Kushite kings.

The Kushites believed that the home of the god Amun was in the mountain of Jebel Barkal, near the 4th Nile Cataract. Such was Amun’s centrality to Kushite beliefs that in the mid 8th century BC, the Kushite kings invaded and conquered Egypt as champions of the god Amun. These kings are known in Egyptian Pharaonic history as the 25th Dynasty. Of them all, King Taharqo is the most famous, and is mentioned in the Bible. However, after ruling for around a hundred years in the 8th century, the Kushites were expelled from Egypt by the Assyrians. Nonetheless, the Kushite kingdom flourished in Sudan for another 1000 years, remaining powerful, and maintaining close contacts with Egypt.

Our excavations bisected Dangeil’s Amun temple along its processional axis. We established that it was orientated east-west with the entrance facing the Nile and that it is quite big: approximately 48.5m east-west by 33.5m north-south. The walls are largely built of red and mud bricks and the roof was held up by columns with drums made of red brick quarters or thirds.

Carefully laid sandstone flagstones of varying sizes were used as flooring in the central corridor, its second court and sanctuary. Long depressions are visible in the floor of the second court. These appear to correspond to the placement of the temple’s roof beams and were probably caused by rainwater leaking through the roofing and dripping from the beams onto the soft sandstone floor. Though the region receives only 25mm of rain per year, it tends to fall all at the same time.

Graffiti were also inscribed on this floor. These included the Meroitic letter ne inscribed in a box, and the footprint of a pilgrim. We remain unclear on the meaning of ne: Meroitic, is the local written language of the Kushites, and is yet to be deciphered. As for the footprint, we often find images of feet or sandals inscribed in or near to holy places, created as a marks or expressions of piety, during the Late Kushite period. The sanctuary was buried beneath fallen sandstone blocks and pieces of the chapel facings. With the sanctuary exposed, four decorated sandstone columns, and two altars were visible along with three chapels. Unlike the rest of the temple, the sanctuary columns consist of sandstone drums stacked one upon the other, with a thin paste of mud mortar sealing them together

Each is decorated with eight fertility figures striding forwards toward the main altar. Each figure wears a headdress of Nile plants and carries two jars from which are pouring offerings of water or milk to Amun. One of the altars was also decorated with these fertility figures. Moreover, from within the temple sanctuary we found painted wall plaster fragments containing a vertical column of Meroitic hieroglyphs along with portions of the lotus flower headdress and hair of a fertility figure. It appears that fertility figures pouring offerings were painted in the lower register of the sanctuary walls, presumably striding towards the main altar, just as their counterparts on the columns do. Pieces of painted plaster found on and within the mound suggested that the temple and associated buildings had once been brightly decorated.

The remains of three altars and a raised dais were discovered within the Dangeil temple. A range of evidence indicates that offerings including water, milk and bread, formed a major component of Kushite worship and ritual. At Jebel Geili, 120km east of Khartoum, a victory relief of the Kushite king Sherkaror (20- 30 AD) shows a god giving the king prisoners and a head of sorghum, a cereal from which breads and porridges are made. Bread was also baked in temple ovens. It would be offered to the god who, so the worshippers must have believed, would consume its spiritual essence. Presumably afterwards, the physical bread itself would be eaten by the priests and variously appropriate persons.

Among the bread mould sherds, we discovered an interesting ostracon. A black grid was painted on the pot sherd and a Meroitic number, usually one or nine, was written within each box. While the meaning of these numbers is uncertain, it seems likely that the bakers were recording batches of bread or an ingredient used in bread production. It is not certain whether the grain used to make the bread was emmer wheat or a free-threshing wheat. In any case, the cone-shaped loaves produced would have been rather dense. The results of our archaeobotanical studies are eagerly awaited in the hope that this question can be answered and some light cast on the origins of various crops in East Africa.

Returning to the temple sanctuary, within its fill, we found more evidence for ritual activity, including fragments of incense burners, ankh-shaped offering trays (the ankh is a round-topped cross and the Egyptian symbol for life), and a palette – perhaps for grinding the god’s cosmetics, plus numerous pieces of a finely carved, pink sandstone altar. Some altar fragments contained the names of the 1st century AD Kushite queen Amanitore, written in Meroitic hieroglyphs and enclosed in cartouches. Clearly, she was a major benefactor of the temple and may have founded it or substantially renovated an existing structure, together with her king Natakamani. Interesting, then, that fragments of her altar are to be found in the sanctuary’s fill.

In fact, we found the core of the Amanitore altar among the debris within the central sanctuary. It had been purposefully smashed, broken in two and all decoration chipped off, leaving two rather sad, rounded boulders.

Further evidence of destruction emerged when we unearthed part of the avenue leading from the temple to the main gate in the temenos (surrounding) wall. We found a series of statue pedestals flanking the road on either side; but no statues. Sandstone fragments of ram statues, including eyes and fleece, show the statues too were smashed in a fashion similar to that of the Amanitore altar.

Finally, a major fire had ripped through the temple. We found extensive remains of charred roof beams and roofing material just above floor level in every room of the temple. Following this dramatic burning, the temple slowly collapsed in on itself and appears largely abandoned. The cause or instigator of the fire is unknown. However, the stratigraphy indicates that the Amanitore sandstone altar in the central sanctuary, and perhaps also the rams flanking the processional way, were smashed just before this fire occurred. This suggests that the temple was destroyed on purpose.

The end of the Kushites, the end of Dangeil city

This may have contributed to or sealed the collapse of the kingdom, but whether Dangeil provides actual archaeological evidence of this event is uncertain. Little evidence of such an event has been recovered from Meroe itself.

We plan to continue our excavations and fieldwork at Dangeil during the autumn of 2006 in the hopes of answering some of these questions. Sizeable areas of Dangeil and its associated cemeteries remain unexplored and appear substantially preserved.

As such, Dangeil provides a unique opportunity in Sudan to study the characteristics of a Late Kushite temple complex, its cult rituals and the surrounding settlement, thus enabling a better understanding of Late Kushite society and lifestyle some 2,000 years ago.