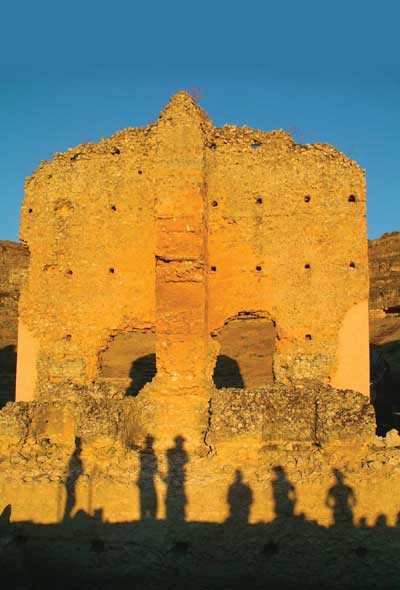 As a Roman city, Colonia Clunia Sulpicia failed. Perched high on a vast plateau, Clunia was the only administrative capital in northern Spain that died with the Roman Empire, never to evolve into a modern city. The region became more of a backwater as Rome’s power waned and was largely ignored by subsequent Visigoths, Moors and Medieval Christians. Its grandiose monuments, disproportionate to the size of the population, became relics and quarry for looters. The desertion of Clunia, however, proved to be an act of conservation, since archaeologists are now uncovering and studying the city’s monuments – the forum, the baths, the theatre – unhindered by 2,000 years of human progress.

But what spurred its collapse? Clunia boasted a strategic military position, the largest theatre in Iberia, and an infrastructure for providing and removing water to rival those in use today. It was also granted the status of a conventus capital – a provincial capital with its own important legal and administrative functions. Nevertheless, of the seven conventus capitals in Hispania’s northern Tarraconensis region, Clunia was the only one not to become a diocese and expand into a larger city in later times.

Looking at the geographic distribution of Roman Spain, we can see how Clunia changed from an important administrative centre in the 1st century AD to a secondary city under the domain of the distant Carthago Nova, modern Cartagena. What is not clear is whether the cartographic shake-up sparked the decline or was a reaction to it.

A tale of two cities

Our excavation work in the theatre over the past ten years, plus a study of the excavations of the forum, baths and adjacent buildings which took place throughout the 20th century, has been charting the rise and fall of Roman Clunia. It appears the city went through two phases: the original settlement following Rome’s conquest of the area in 55 BC, and then a more monumental city built over it, possibly after Clunia was named a conventus capital in the 1st century AD. The aim of this second phase was to convey prestige. Clunia’s new grandiose structures were to be used by its citizens and people from outside the city when they flocked to the administrative capital for events such as festivals, or when important business was taking place. We do not know exactly when Clunia was awarded this status, but Pliny the Elder lists Clunia as a conventus capital in his Natural History, published in AD 77.

Some archaeological remains from the original settlement lie deep below the surface. One of the reasons why we think the Romans built their city on this plateau instead of on top of the Celtiberian city is because of its large aquifers, which the Romans tapped for drinking water and for the baths. Archaeologists have discovered a dozen wells throughout the city – it takes around three seconds for a pebble to hit water.

Our scuba-sporting spelunkers spent days exploring the underground networks. They entered a cave on the northern slope of the plateau – intriguingly known as the Roman Cave to the locals – and found that the Romans had carved tunnels between the aquifers in order to even the water level.