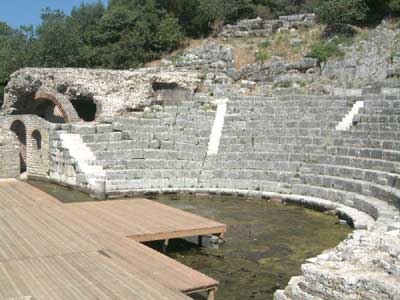 The third major project has been the hunt for Atticus’s villa. Atticus was Cicero’s close friend and the letters he wrote to Atticus present the relaxed correspondence of two cultivated but very busy gentlemen. Atticus, meanwhile, had a villa near Butrint. Could this now be located? The favourite site so far has been one at Diaporit, on the opposite side of the lake to Butrint, a 30 minute boat ride in a leaky elderly rowing boat powered by a modern outboard motor, to an idyllic location. The site was originally investigated in the 1920s when a basilican church of the 5th century was uncovered. However, the remains of a large villa were noted in the vicinity and during the time of the Butrint Foundation it became known as Atticus’s villa. Could the claim be sustained?
The initial excavations by the Institute of World Archaeology soon revealed a large and luxurious villa, but the remains dated to the late 1st and early 2nd centuries AD – too late to be that of Atticus who lived in the mid 1st century BC. However, there was plenty of evidence for occupation during this period in the form of Republican pottery – that is pottery of the 1st century BC – and in 2003 the remains of this earlier villa were finally discovered. It lay on a different alignment to the later villa and was a comparatively modest structure with little sign of the ostentation of a major Republican villa. However, Atticus prided himself on his humble lifestyle, though the excavators note that ‘protesting one’s simple lifestyle was a common conceit among the Roman aristocracy, that may not have been reflected in reality’.
In the mid 1st century AD the villa was totally rebuilt on a fresh alignment. Whereas the old villa faced onto the lake, the new villa was slightly skewed, so that when viewed from the town of Butrint across the lake, it would have appeared face-on. However, the building of the new villa appears to have been carried out in a rather ad hoc fashion with the drains, in particular, being inserted as an afterthought. It is tempting to imagine an absentee owner vacillating over the design of his holiday residence while unscrupulous builders took advantage of his absence to cover up poor quality work.
By the 3rd century, the life of the villa came to an end. The great apsidal room of the bath complex was turned into a kitchen and a pottery kiln was inserted in one of the principal rooms: some of its products have been found in the city excavations.
In the 5th century the church was constructed to the immediate north of the ruined villa, making use of an accessible supply of ready-cut stone. The church itself appears to have been a pilgrimage centre based around the veneration of three tombs found in the eastern apse and it is possible that a small chapel and bath adjacent were intended for the use of wealthy visitors. It is probably the oldest such pilgrimage centre discovered in the area – a coin of the Vandal king Thrasamund, dating to AD 493, was found in the floor make-up; but it did not remain in use for long and little has been discovered later than AD 550. Was it a victim of unrest as the Slavs passed through the Balkans or merely of the economic downturn that is so clear in the excavations of the Triconch Palace?
– Andrew Selkirk