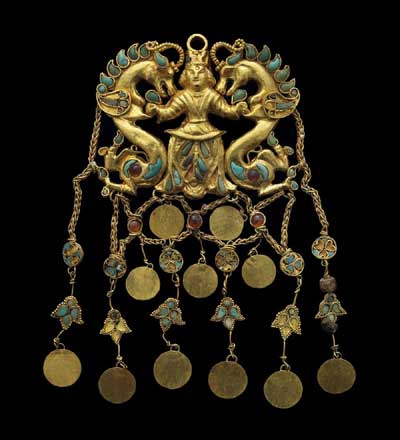 In March 2001, appalled by the destruction of the Bamiyan Buddhas at the hands of the Taliban, the museum’s president Jean François Jarrige planned an exhibition drawn mainly from European collections. His intention was to celebrate the history of this region, which lay ‘at the centre of kingdoms and empires extending … from Central Asia to northern India’. Jarrige proposed to call it Afghanistan, une histoire interdite (Afghanistan’s Forbidden History) but settled eventually on the less inflammatory Afghanistan, une histoire millénaire (Afghanistan, a Millennial History). He wanted to demonstrate that ‘dynamite in the hands of opponents of intellectual advancement could not erase humanity’s shared heritage of culture’. By the time that the exhibition opened the world had witnessed another atrocity, the murderous destruction of the Twin Towers. Afghanistan was then plunged into even more misery and chaos. That exhibition closed in 2003.

However, the Guimet Museum’s new exhibition, Afghanistan, les trésors retrouvés, or Afghanistan, Rediscovered Treasures, celebrates something more than the triumph of culture over explosives. This display showcases the survival and rediscovery of some priceless treasures, originally from the Kabul National Museum and later relocated to the Central Bank vaults beneath the Presidential Palace.

Here on display in Paris are 228 items from that total hoard of 21,618. The four sites are of varied historical and geographical origins from within what is now Afghanistan, all of them potentially earning the severe disapproval of extreme fundamentalists for being pre-Islamic. The finds had narrowly escaped seizure by the Taliban.

How did they survive? During the 1980s Afghanistan was torn by conflict as the mujahideen routed Soviet forces. The National Museum was badly damaged and the treasures found their way into the Presidential Palace strong rooms. Later attempts by warlords and Taliban to open these vaults were thwarted. The sophisticated security system demanded the simultaneous insertion of seven keys by seven people. Neither the keys nor their holders were ever located. The vaults proved to be impregnable. Few people, certainly not those trying to break in, knew for certain what the vaults contained. The museum treasures had been given up as lost by most observers, particularly when some items had turned up on the international art market. Finally in 2004 relative peace and the application of technology instead of force revealed the hidden treasures.

These finds, now on display in Paris, celebrate the uniqueness but also the wealth of Afghan heritage in a region that has been influenced by a raft of cultures including Near Eastern, Indian, Chinese and Hellenistic. The items date from the Bronze Age (the exhibition opens with three stunning gold Bronze Age vessels excavated at the Bactrian site of Fullol) to Hellenistic times and its aftermath.

At this exhibition’s heart is a glorious hoard of objects from six richly furnished graves (five women and one man) excavated by an Afghan-Soviet team in 1978. Here we discovered the reason for the sluggish queues. In the semi darkness of the gallery we basked in the glow of brilliantly lit displays. The crowds seemed mesmerised by the contents. As in any self-service restaurant one can only move on when others do. There was little incentive to hurry.

These treasures were from Tillia Tepe (the ‘hill of gold’). The graves were those of ‘princely nomads’ entombed at a site in the north of Afghanistan and at the crossroads of Eurasia. The graves contained over 20,000 extremely rich objects dated to around the 1st century BC.

The extraordinary hoard, one of the world’s major archaeological finds, is represented here by a selection in a series of glass-fronted cases. Displayed are intricate and finely crafted items in the form of golden pendants and items of costume jewellery. Some are made from many tiny parts, often depicting animals, fishes and mythical beasts. The detail is so sharp, clean and bright that you could believe them just created, rather than being more than two thousand years old.

Among these pieces of jewellery, made from a combination of gold, turquoise and lapis-lazuli, are Graeco-Roman, Indian and even Chinese finds. These the Guimet says ‘bear witness to the contact those nomadic peoples had with the great empires of their surrounding world’.

As a prelude to entering the Tillia Tepe display we had already passed through a large gallery devoted to the establishment of the Graeco-Roman Empire and its influence in Afghanistan. Of all those countries or people associated with Afghanistan’s past, the mighty Alexander the Great, makes one of the biggest splashes. His presence is certainly felt in the exhibits from Ai-Khanum, a Greek-influenced city in north-eastern Afghanistan. Ai-Khanum is sometimes identified as Alexandria-in-Sogdia or as Ptolemy’s Alexandria-on-Oxus. It lies at the confluence of the Oxus river (today’s Amu Darya) and the Kokcha river and was founded in the 4th century BC, seemingly after Alexander’s conquests.

Our appreciation of the city is fired by an imposing moving image showing a virtual reconstruction of this enormous site. It was here that his soldiers were soon to be faced with the daunting prospect of scaling the Hindu Kush and the 11,000 foot Khaiwak Pass. Many, including Aristotle, had thought that it might be possible to see the edge of the world from the summit. Ai-Khanum was to become one of the focal points of Hellenism in the East for nearly two centuries, until its annihilation by nomadic invaders around 140 BC.

The French Archaeological Delegation in Afghanistan excavated Ai-Khanum between 1964 and 1978. Their work ‘demonstrates how

far Hellenism penetrated into Central Asia, and the lasting influence of the culture in this region’, according to the exhibition. ‘Lasting influence’ is an understatement: early in the 20th century, the King of Greece visited Punjab province of what was British India. A tribal dancing display was organised. He soon recognised the steps of a harvest festival dance from his own northern Greece.

Finally, the exhibition takes us to the treasures from the city of Begram, another Alexander-influenced site, excavated by a

French team in the late 1930s. Having been destroyed by the Persian king Cyrus in the 6th century BC, it was fortified and rebuilt by Alexander who renamed it (ever the modest one) Alexandria of the Caucasus. Begram was to become one of the capital cities of the Graeco-Bactrian Kingdom.

The city lies 60km north-west of Kabul, built at the junction of the Ghorband and the Panjshir valley, thus acting as a passage point to India on the Silk Road, towards Kabul and Bamiyan. Its location has influenced its archaeology: a host of works of art, including ivory carvings and bronzes, collectively known as the “Begram Treasure’ were found in two sealed chambers. Once again, the artefacts tend to be purely Hellenistic, Roman, Chinese or Indian, pointing to intense commercial exchanges between east and west via Begram. Of all the items from Begram, a cache of fine glassware believed to be the oldest Graeco-Roman glass yet discovered, is most impressive. Perfectly formed, it is thrilling to see that they remain largely intact – so ancient, so fragile and having survived so much history in this troubled land.

It was a privilege to be able to see the 200-plus items in the exhibition, particularly since at first the Afghan government refused to allow all these treasures out of their country. They eventually reversed their ruling, but then international insurers would not cover the transport. The job of ensuring safe transit was given to the French armed forces. The insurers relented.

We were heartened by the way the exhibition demonstrates that archaeology can surmount many barriers. French experts are doing restoration works on the treasures. A proportion of the Guimet museum’s takings for this exhibition will go to the National Museum in Kabul. This exhibition should be seen.