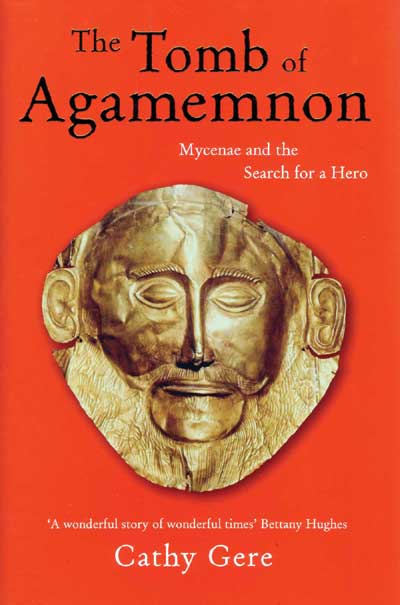 In the 1870s, the German grocer Heinrich Schliemann decided to devote the wealth he had accumulated in grocery to go and dig up first Troy and then Mycenae. In Mycenae he struck gold – literally. In 1876, just inside the Lion Gate, he excavated a circle of stone slabs which contained five shaft graves and 17 corpses, lavishly endowed with gold. Several of the corpses had gold death masks, most of them crude, but one had startlingly realistic features. This was what he was looking for: ‘I have gazed upon the face of Agamemnon’ he proclaimed: the gold was carted off to Athens, Schliemann set out on a lecture tour and at the Society of Antiquaries in London he was feted by all, including William Gladstone, Greek scholar and some time prime minister.

Those well known spoil-sports known as archaeologists soon began to deconstruct this upstart grocer. The shaft graves are some four centuries earlier than the presumed date of the Trojan war and gradually the story of the Greek Bronze Age began to be elucidated, first in 1893 by the Greek archaeologist Christos Tsountas, and later in 1964 by the American archaeologist Emily Vermeule. Nevertheless Agamemnon maintained his grip. The face mask is indeed stunning and today has pride of place in the National Museum at Athens, and in the first third of the 20th century, Agamemnon and Mycenae held heroic status: Sir Arthur Evans had discovered a rival civilisation at Knossos, but Evans sold the Minoans as being peaceful seafarers, so the way was clear for the Mycenaeans to be presented as heroic warriors. A range of writers and philosophers ranging from Friedrick Nietzsche, Sigmund Freud and Oswald Spengler down to Henry Miller found inspiration in Mycene. As a decorative motif, swastikas and butterflies were to the fore, and Schliemann decorated his magnificent house in Athens with butterflies and swastikas. The swastika came to be seen as the symbol of Arians, Mycenae, and strong and virile heroes: it is perhaps sad that the swastika was adopted by a distant branch of the Arians known as the Germans who turned it, probably irretrievably, into a symbol of evil.

The story of Schliemann and Mycenae is now brilliantly retold in a new book, The Tomb of Agamemnon: Mycenae and the Search for a Hero by Cathy Gere, a very slim volume and the latest in the Wonders of the World series published by Profile Books (£15.99). (We have already noted books in the same series on The Temple at Jerusalem and The Colosseum at Rome: The Temple of Jerusalem by Simon Goldhill has just been published in paperback at £8.99 and is well worth buying and reading for its illuminating account of the similarities and differences between Jews, Christians and Muslims.)

Cathy Gere takes an astringent look at the whole story of Mycenae, at its strange good fortune in being a remote site that unexpectedly sprang to significance in the late Bronze Age but was then abandoned and thus preserved. But the strength and novelty of the book lies in the discussion of the relationship of the modern world with Mycenae; there is a splendid final chapter looking at archaeology in the latter part of the 20th century when archaeologists everywhere were seized by a strange pacifism which saw British hill forts and Mycenae alike as being symbols of prestige rather than being symbols of war and she concludes with a look at the more recent ideas that seem to be emerging that see Mycenae as once again as being a military strong point. This is proving to be a fascinating series, and this book looks at a classic site from a new and interesting standpoint.