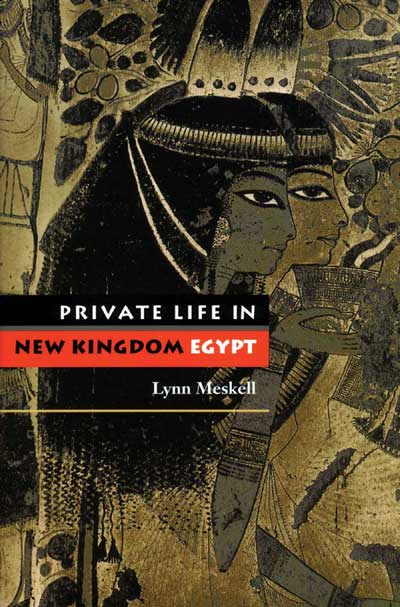 Every time an archaeologist looks at non-élite everyday data, this is heralded as something special, unusual, praise-worthy, and in the case of Meskell’s book, is described as ‘pathbreaking’. In fact, increasing numbers of researchers are looking at the regular every-day lives of the ancients. In the Ancient Egyptian arena, this is helped by the wealth of material from Deir el Medina, the workmen’s village above the Valley of the Kings, where the workmen proved to be so surprisingly literate. Lynn Meskell has already completed some notable work on the texts from the site. In this book about private life in Egypt’s New Kingdom (c.1539-1075BC), she brings together a wide range of evidence, including archaeological, iconographic and textual.

It must be said at once that this is an academic and very ‘theoretical’ book. This means that she spends the first chapter discussing the semantic and interpretive difficulties inherent in trying to define ‘private’, and whether the Ancient Egyptians would have perceived certain boundaries that we might draw between the public and the private.

The remainder of the book looks at the ancient commentary or artefacts of individuals, rather than state sanctioned rhetoric, and these she organises thematically according to various aspects of the human life cycle. This includes such areas as birth, death, love and sexuality in Ancient Egypt.

In the chapter dedicated to the latter, Meskell pertinently points out that modern social theorists tend to locate romantic love within the development of Western European civilisation. They link it to modernisation and rationality, and totally bypass the ancient date. As she argues, though Western expectations and beliefs about romantic love have indeed developed from a unique historical trajectory and cultural background, this should not blind us to making connections between our emotional lives and those of peoples in other cultures – both past and present. This she beautifully illustrates through the literary sources. Romantic love and attachment, she argues, is not intrinsically linked to capitalism, small nuclear families, sexual oppression, or even the quest for identity. Rather, people in New Kingdom Egypt appear to recount the same sort of idealisations of the beloved, and the same feelings of exaltation in their presence or despair in their absence. In illustration, she draws on a variety of love poetry – the great innovation of the Rameside age – such as the following heart-felt stanza: ‘I kiss her, her lips are parted, I am exhilarated without beer. Oh, how the gap has been bridged’.

Yes, even without beer. The overall result is an engaging interpretative journey into the private lives of people who lived over three millennia ago.