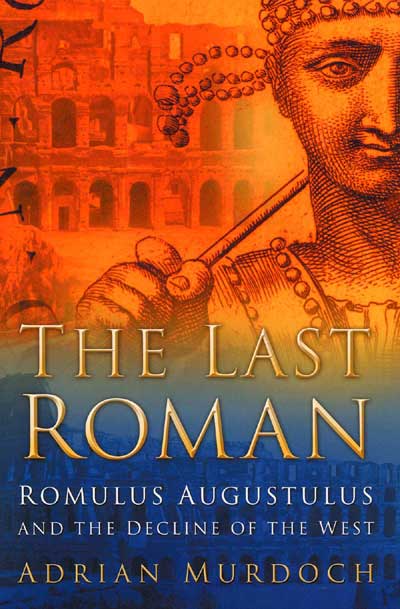 The Last Roman: Romulus Augustulus and the decline of the West
Adrian Murdoch
Sutton, £18.99

Romulus Augustulus is very much the forgotten man of Roman history.

Emperor for only ten short months at the age of 12, he was then sent into exile as the Western Roman Empire arguably ceased to exist. This new study by Adrian Murdoch attempts to locate the role of Romulus in the dramatic events of AD 476 and to bring the shadowy figure of the last Roman emperor to life.

Murdoch has an eye for a good story having previously written about Julian the Apostate and the massacre of three Roman legions in the Teutoburg Forest in AD 9. Here again he writes about a period rich in character and great events.

The fall of the Empire in the West has received a great deal of scholarly attention over the last few years. Two recent studies are Peter Heather’s The Fall of the Roman Empire and Brian Ward-Perkins’ The Fall of Rome and the End of Civilization (CWA14). Murdock allies himself closely with, among others, Peter Heather by concluding that the end of antiquity was marked by violent change rather than smooth transition. Key to this was the transformation of the role of emperor into that of ceremonial figurehead with real power resting with warlord generals such as Romulus’ father Orestes.

The book begins with a wellimagined and evocative description of the journey to Constantinople of diplomats bearing Romulus’ imperial regalia for handing over to the Byzantine emperor Zeno. Most of the rest of the text deals chronologically with events up to this point.

Murdoch writes in an engaging, journalistic style, and the narrative is filled with interesting anecdotes and witty asides. He memorably compares the decline of the west, for example, to the flagging libido of the poet Maximian the Etruscan.

After Romulus’ deposition he went into exile at Misenum, and Italy fell into the hands of the ‘barbarian’ Odovacer. Murdoch discusses what happened to the young former emperor, whether or not Odovacer wanted to be king or emperor, and what Italy was like under its new ruler.

The problem for the author, which he freely acknowledges, is that he is attempting to write a book about a man of whom very little is known.

Consequently, the final chapters are spent discussing the perception of Romulus by later writers and filmmakers; even iPods and George Bush’s foreign policy are touched on.

These speculations do not add to our knowledge of the period. All of which begs the question of whether Adrian Murdoch is really writing Roman history at all? I think not, but he has produced an entertaining and thought-provoking snapshot of a complicated period. His book might act as an excellent primer for those new to the end of Roman power in the West who wish to examine these singular events for the first time.