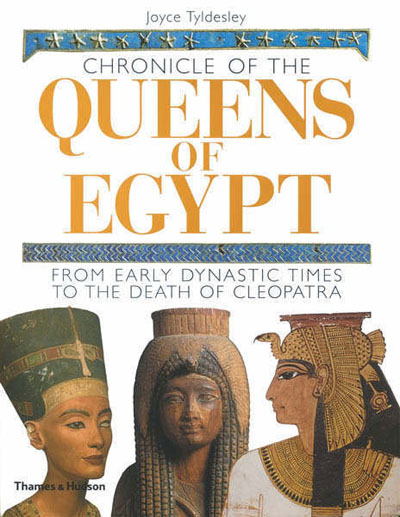 Chronicle of the Queens of Egypt
Joyce Tyldesley,
Thames and Hudson, £19.95

How powerful were women in Ancient Egypt? To judge by the number of queens that are known, many of them were surprisingly powerful.

This was the time of some of the most famous Ancient Egyptian queens, including the formidable Hatshepsut, and Nefertiti whose name, quite simply, means ‘A Beautiful Woman has Come’.

In this latest Thames and Hudson offering, Joyce Tyldesley author of best-selling books on both Hatshepsut and Nefertiti, offers a comprehensive round-up of the queens of Ancient Egypt. The book is essentially organised as a compendium; thus each section begins with an introduction to the era, followed by an entry on the woman in question.

And since this book covers the full history of queenship in Ancient Egypt, in addition to the famous queens, we also learn of lesserknown ladies.

One such is the New Kingdom woman Meritamun who lived during the 18th Dynasty, a period that stretched from 1539-1292. Of the few things we know about Meritamun is that she was the daughter of Ahmose-Nefertari who was consort of King Ahmose.

Meritamun’s mother Ahmose-Nefertari took various titles including ‘King’s Daughter’ ‘King’s Sister’, ‘King’s Great Wife’, and the more unusual ‘God’s Wife of Amun’ – which appears to have been intended to endow his wife with a fund of lands, goods, and male administrators.

This endowment was to be held by the queen and her descendents for ever.

Indeed, Meritamun took over the position of God’s Wife of Amun from her mother. But about all else that we know about Meritamun is that she died young having suffered from both arthritis and scoliosis (curvature of the spine).

This information comes from the examination of her mummy, which was found lying in two cedarwood coffins and a cartonnage outer case in her Deir el-Bahari tomb that had been desecrated in antiquity and which had been rebandaged during the 21st Dynasty.

As one gazes upon her beautiful portrait (see right, above), with its deep black eyes and wan smile, one can almost feel the physical pain she must have suffered in life as a consequence of her illnesses.

Indeed, for me the most alluring aspect of the book is the sumptuous illustrations. And for morbid types, the photographs of unwrapped mummies are just fascinating. Queens of Egypt provides a beautiful yet handy reference book that spans from Early Dynastic times to the death of Cleopatra VII in 30 BC and includes special features such as ‘Personal Hygiene’ and ‘Sexual Etiquette’ as well as genealogical trees and time-lines.