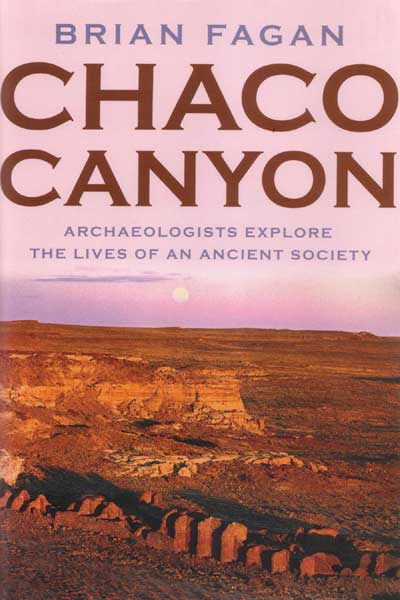 Chaco Canyon is situated in what must be one of the most unpropitious landscapes in the world. Lying in the American South West, inland from California, in the corner where New Mexico, Colorado, Utah and Arizona all meet, it is near-desert, a harsh and capricious arid landscape, subject to the vagaries of the climate. Yet there are irregular rainstorms summer and winter, and in the canyons, precarious settlement is possible, and for much of the first millennium AD it was successfully colonised and cultivated. Indeed from AD 900-1200 it attained a certain magnificence, with a number of substantial settlements set round huge ‘D’ shaded enclosures known as ‘pueblos’ which must have formed the centres for control and ritual activity.

Chaco Canyon was discovered by the archaeologists early, and at the beginning of the 20th century it was the subject of classic excavations where the principles of pottery analysis and site stratigraphy were applied for the first time. Then in the 1930s it was adopted by the newly emerging science of tree-ring dating that was springing up in Arizona. It was applied vigorously and soon it was possible to date houses to the exact year, and still today there must be few sites in the world that can be as accurately and precisely dated.

It lay in a National Park and has become a major national monument laid open to the visitor. However, major excavations continued down through the 1970s and are still continuing to this day, though on a smaller scale. Brian Fagan in his new book Chaco Canyon – Archaeologists explore the rise of an ancient society provides in his usual inimitable way a superb account of the excavations.

Activity was centred round the so-called ‘big houses’. They used to be called Pueblos, but ‘Big House’ seems more appropriate for their status. The largest of these is the Pueblo Bonito which stood up to four storeys high and contained up to 700 rooms spread over three acres. They were arranged in a ‘D’ shape, all tightly packed together. How far they were all occupied at one time remains controversial and certainly the lower stories may have been used for storage, for it was always necessary to store enough food to guard against two or three bad years. In front were the underground circular structures known as Kivas which may have been the relics of earlier pit dwellings but must have had some sort of ritual function. At its peak, there may have been up to a dozen of such big houses scattered through the canyon as well as numerous small dwellings.

One of the most fascinating aspects of Chaco is that thanks to the tree-ring dating, the construction dates can be tightly assessed and tightly linked to the climatic changes. The earliest major phase came in the 5th and 6th centuries AD in the so-called ‘Basket-maker’ phase when the first substantial villages of pit dwellings make their appearance. Then there is a gap until the 850s when the first part of the Pueblo Bonito is constructed. However, the climate then deteriorated and the construction slowed between 900 and 1020. But the classic phase comes between 1020 and 1100 when the climate stabilised. Small-scale water control structures were introduced, a dam was built across the top of the valley to form a small lake where the summer and winter storms could be preserved for the dry seasons, and small canals just over a metre wide were constructed to water the fields. In this short period, the population expanded, and perhaps over-expanded. Between 1080 and 1100 there were 20 dry years, but these were followed by 30 years when rainfall again increased, and Chaco prospered. Then came disaster: 1130 -1180 saw a long period of drought: infant mortality increased, the store rooms were emptied, and finally Chaco was abandoned. Many no doubt died, but it appears that part at least of the population emigrated to the San Juan river area 70 miles to the north, where new settlements such as Aztec West sprang up with a very similar culture: by 1150 Chaco was deserted.

The mass of evidence from Chaco stimulates a mass of discussion. It appears that, even in the classic phase, they were no long self sufficient. First timber had to be imported, then pottery, then food and there was increasing emphasis on manufacture, particularly the production of turquoise goods. And the social structure, though clearly basically egalitarian, remains a mystery. Brian Fagin pulls together all these aspects in a comprehensive account based on his many years of familiarity with Chaco Canyon and here he offers a glimpse into one of the most noteworthy sites in American archaeology.