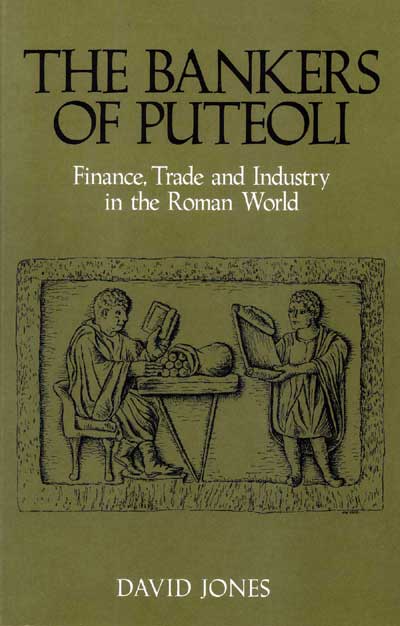 The Bankers of Puteoli: Finance, Trade and Industry in the Roman World
David Jones
Tempus, £19.99

In 1955, a hoard of over a hundred wax writing tablets was discovered when a motorway was being constructed 500 yards south of the Stabian Gate at Pompeii, in an area known as the Agri Murecini. Publication of the tablets has not been exactly speedy, but 54 years later, the tablets were finally published. The two volume publication of the Tabulae Pompeianae Sulpiciorum, by Guiseppe Camodeca proved to be ‘definitive’, and provides a major new source for life in the Roman Empire in the first century AD. However publication needs to be followed by quarrying, and in The Bankers of Puteoli (Tempus £19.99) David Jones has quarried the archive in high style to produce one of the best recent accounts of what life was really like in the early Roman Empire.

David Jones is a classical scholar who went into the world of financial journalism, becoming editor of The Banker, but now he has returned to his first love. There will inevitably be those who will regret that the tablets do not contain something romantic, like poetry or love letters, but for those who wish to learn how another society really worked, nothing can equal a good set of accounts. These tablets are the accounts of a small but successful banking firm, the Sulpicii, between the years 35 to 55 AD. The first surprise is that the bankers were not living at Pompeii but at Puteoli, modern Pozzuoli, some 30 miles to the north along the Bay of Naples and just on the other side of modern Naples. In the 1st century, Puteoli was the most important town in the area. It was a major shipping centre, for the port of Ostia, at the mouth of the Tiber, was not able to take the huge 300 tons grain ships from Egypt and Africa, so they came to Puteoli for transhipment to Rome. In addition, the rich Campanian countryside was the economic power house of central Italy, and could provide many of the luxury goods to be shipped back in return for the grain.

The 100 or so tablets form part of the archive of the medium sized banking house of the Sulpicii, and represent three generations of the firm, from AD 35-55. They all appear to be freemen, that is ex-slaves, and indeed much of the banking world appeared to have been made up of freemen and even slaves, who frequently set up as bankers, sometimes on their masters behalf, or on their own, using their peculium, or pocket money.

The founder of the banking house was Gaius Sulpicius Faustus, whose accounts range from AD 26 to 52. Despite his three names, he was almost certainly a freedman, for Faustus, is a ‘slave’ name – meaning ‘lucky’. In the middle comes Gaius Sulpicius Cinnamus, who again was a freedman – this time of Faustus. His accounts range from 42 to 56, but they are the most numerous. Finally there was Gaius Silpiucius Onirus – again this is a slave name, for Onirus means poppy, or dreamer. There is a suggestion that he may have been sent to Pompeii to set up a subsidiary office there – taking a selection of the accounts with him.

There were many reasons for the success of the freedmen. Many began as slaves, nominally working for their master, though in practice undertaking all the work themselves, and doing some banking business on their own account, building up their peculium. This nominally belonged to the master, but in practice it was regarded as the slave’s own money, and went with him. There were many advantages in freeing a successful slave. Once freed, he was super-energised, but he remained the client of his patronus. If he died intestate, his estate reverted to his patronus, and even if he made a will, up to half his estate went to his patronus.

In practice the patronus would often finance his freedman, and in return the freedman would look after his former master’s business with especial care.

Much of the business of the Sulpicii consisted of short term loans, of amounts ranging from £1,000 to £20,000 and for periods of up to a month – for the sake of simplicity, I am reckoning a sesterce as being the equivalent of £1. A number of loans took place at auction sales – for these were a large part of the activity of a Roman forum – a Roman forum must have been very much like e-Bay. A banking house would manage the auction and supply immediate payment to the vendor, but would allow the purchaser several days to pay; if more time was needed, this could be provided at a cost.

And then there was grain dealing. The ships from Alexandria arrived in early June; thus in April and May, prices were high, but by the end of June prices were low – assuming the ships had arrived. Sometimes grain was used as security on a loan. In one case the security was specified as the grain in bunker number 12 in the middle level of the Bassian warehouse; the bankers even took the precaution of paying the rent for this bunker themselves, to ensure that they could collect upon default.

The tablets also illuminate the position of women in Roman society. Nominally, women had low status, at the beck and call of the head of the family, but in practice they had considerable power and could control large sums of money which they could put to use in banking.

Many of the women in the Murecine tables were freedwomen who acted as principals in financial dealings. Similarly, in the occupational inscriptions of Rome, female ex-slaves are found engaged in such trades as purple dying or the supply of incense. Women often appeared as borrowers in tablets, though the procedures tended to be different – they tended to be ‘cash-box’ loans rather than standard loans, that is they were made in the house, rather than in the open forum.

Augustus introduced important new legislation, giving wives who had three children certain benefits so that they became more independent – they could for instance receive bequests from their husbands to the full value of the estate. The most common form of marriage was the free marriage, where the wife would remain under the authority of her father while he was still alive, but after that she was legally independent and entitled to her own property. A dowry became the property of her husband, but on divorce it could be reclaimed; when Cicero divorced his wife Terentia, the dowry that she brought of HS 400,000 (say £400,000) was due to be returned.

The Sulpicii were in the middle to lower range of banking, and this book is in effect two books rolled into one, for it combines the micro-economics of the Sulpicii with the results of the author’s doctoral thesis, looking at banking in the Roman world generally. Thus in the second half of the book, he looks at the work of the really big financing companies and at their three main activities: financing maritime ventures; putting up the money and paying the contractors for public buildings; and above all, the financing of the firms that won the five year contracts for tax collection. This was, in effect, the civil service of the Roman world and it was all privatised, run by huge companies, always headed by knights. Senators were not allowed to participate, the idea being that the governors of the province, who were always senators, would keep an eye on the activities of the tax collectors, who were knights. It did not always work: this was what Cicero’s famous prosecution of Verres, the governor of Sicily was all about. He, as a senator, colluded with the knights who were the tax collectors and this resulted in his prosecution and exile, so justice was done in the end.

Finally, the book deals with the big question of what role the upper classes of Rome, the senators, played in finance and commerce.

They always pretended to be above such sordid matters, but in practice they were deeply involved, as a close reading of Cicero’s letters demonstrates. It was one of the duties of a Senator to hand on his patrimonium enhanced to his successors and there were many family firms which lasted for several generations.

Banking, however, was something that was essentially carried out at the middle level of finance, being dominated by slaves and freedmen. At the highest level finance was done through families, and this, he suggests, was a major factor that limited long term growth in the Roman economy.

This is one of the most illuminating books I have read on the Roman world for a long time.

By combining the micro-study of this fascinating hoard of inscriptions with a widespread knowledge of Roman law and banking, David Jones is able to throw new light on many aspects of the Roman world, in particular the activities of freedmen and slaves, as well as the position of women. He reminds us that Rome was a remarkably open society, a society open to the talents where the freedmen played an important role in running this dynamic economy. For anyone who wants to understand how the Roman world really worked, this is the place to start.