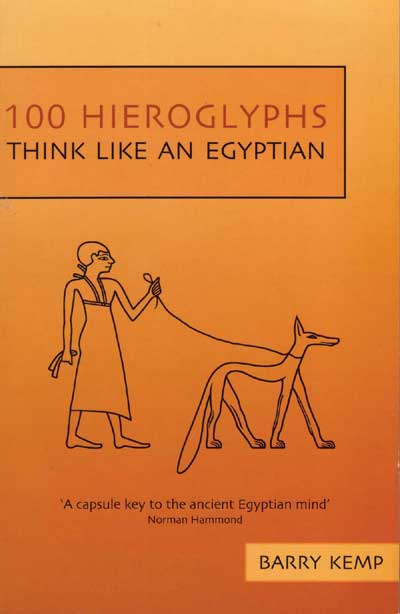 Let us learn a few hieroglyphs. Let us start with a straight line.

This obviously means ‘land’ because in Egypt all the land that is worth talking about is the flood plain of the Nile, which is more or less dead flat. Let us then add three dots below our straight line: these represent the grains that have been planted in the land and are about to spring up. Land is good, land is fertile and land brings us prosperity.

Our next sign is a series of humps. This is the opposite of the land, and is the desert, the horrid, inhospitable land that lies beyond the flood plain. It is all mountainous, foreign and hostile, so this does not just mean ‘desert’, it also means ‘nasty foreigners’.

Our third hieroglyph is a circle with a cross in it. This we obviously recognise as meaning ‘a town’ or ‘city’ because it shows the feature of a town – a crossroads, and it is surrounded by a bank and a ditch to keep out outsiders. This symbol is often used to mean ‘The Town’ – in other words, Thebes, just as in English we talk of ‘going up to town’ when we mean going to London.

The next hieroglyph is a little more difficult. It shows three reeds waving in the wind, and thus means ‘countryside’.

And … well I am meant to be reviewing this book, not teaching you hieroglyphs, so if you want to read about the other 95 hieroglyphs you will have to buy the book which is called, 100 Hieroglyphs: Think Like an Egyptian. It is by Barry Kemp, Reader in Egyptology at Cambridge and one of my favourite Egyptologists because he also understands about anthropology and primitive societies outside Egypt. Here he describes and illustrates his 100 favourite hieroglyphs, with a splendid little disquisition on each, allowing the reader to ‘think like an Egyptian’. The book is very light in weight and easy to read, even if it is printed on lavatory paper. For a more detailed account of how to read hieroglyphs, a simple introduction is Mark Collier and Bill Manley’s How to Read Egyptian Hieroglyphs.

Barry Kemp leaves us with the subversive thought that, thanks to the popularity of hieroglyphs among amateur Egyptologists and Egyptian tourists, there are probably more people alive today who can read hieroglyphs than there ever were, at any one time, in ancient Egypt, when only the priests and bureaucrats were able to read.