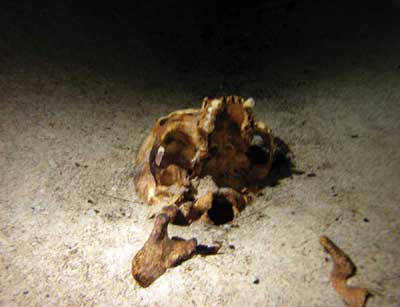 The Yucatan peninsula of Mexico has few rivers and lakes, but it does have some 2,500 cenotes (sink holes leading to flooded cave systems), which have long been the principal source of water. Now Guillermo De Anda, Professor of Underwater Archaeology, at the University of Yucatan, has found evidence that child sacrifice was practised as a means of petitioning the rain god Chaac for continuity of supply.

Professor de Anda has examined 2,500 bones retrieved in the 1960s from the Cenote Sagrado (Sacred Cenote) at Chichen Itza. He found that almost 79 per cent of the remains are of children aged between three and11. Of the remaining 21 per cent, 22 are adult males and seven are women aged between 20 and 35.

Because it is difficult to determine the sex of individuals below 15 years of age on anatomical grounds, it is not possible to say conclusively whether the children were boys or girls. Human remains found in cenotes by early Spanish colonisers were often adorned with jade jewellery, so it was assumed that the victims were young girls. Professor de Anda believes that they are more likely to be boys, however, based on his study of Maya religion and cosmology.

‘Ancient beliefs remain strong in the modern Maya minds’, he says. ‘Even though the people of the Yucatan peninsula are largely Christian today, there is still an annual ceremony called Cha a chac that takes place on the edge of caves and cenotes. Boys not older than 12 represent the four cardinal points and mimic the sound of frogs to obtain good rain. They do not believe in Chac, or the ancient gods, but they have adopted Catholic icons to represent the holiness that these places had in pre-Hispanic times.’

Professor De Anda says that the next stage in his archaeological research project is to use remotely operated vehicles (ROVs) fitted with cameras to examine the 2,500-plus cenotes in the State of Yucatan looking for fresh evidence of human remains, which will then be recorded by his team of underwater archaeologists. He also plans to use biochemical techniques (such as DNA analysis) to determine the sex of any children he finds.