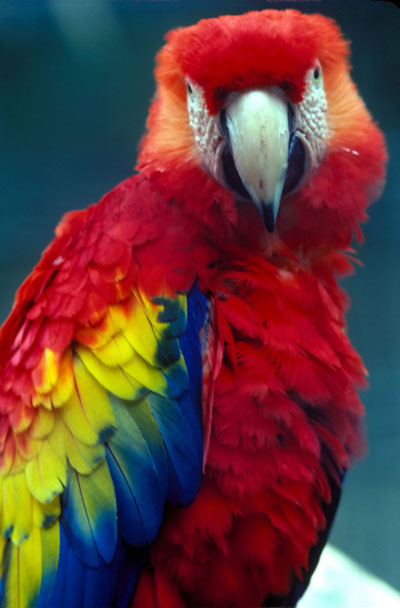 Birds of a feather

Ah, the deliciously obscure byways of archaeology – always a source of innocent entertainment and sometimes fascinating insights into ancient life. Take the scarlet macaw (Ara macaw), whose feathers come in vibrant red, blue, and yellow hues. Macaws are tropical bird, indigenous to southwestern Mexico and other parts of tropical Mesoamerica, which subsist off a wide range of fruits, seeds, and flowers. Their plumage long enlivened ancient ritual. As early as 300 BC, Olmec and Maya priests and warriors in the tropical lowlands prized macaw feathers for their regalia. The fashion spread to the Mexican highlands and far to the north. Between about AD 100 and at least 1150, Indians in the Southwest treasured such exotic adornments as part of their ceremonial regalia. They seem to have traded in bundles of feathers and complete macaws. At Chaco Canyon, New Mexico, the people imported what were probably only a few adult birds. The skeletons of 12 macaws came from Room 38 at Pueblo Bonito, the largest of the great houses in the canyon, perhaps a repository for birds that played an important role in major rituals. There may have been a Macaw Clan at Pueblo Bonito, which used the bird’s feathers ceremonially. At Paquimé in northwestern Mexico, traders kept scarlet macaws in adobe pens with stone plugs more than 310 miles (500km) north of the bird’s tropical homeland. By studying the ratios of carbon and oxygen isotopes in the bones of 30 Paquimé macaws, Andrew Somerville of the University of California, San Diego, has shown that the captive birds mainly ate maize, a diet quite different from that of macaws in the wild. All were juveniles, which did not live long in captivity and were frequently replaced. Did the inhabitants of Paquimé actually breed macaws? Oxygen isotope measurements show that all but one of the birds drank local water – the single exception may have been an imported bird. But, as breeding experts point out, macaws need a balanced diet, not just maize, while reproducing. And sexing them is a challenge at the best of times. Who would have thought that archaeology would delve into the esoterica of breeding macaws?

The anonymous Palaeoindian who relieved himself – or herself – at Paisley Cave in Washington State’s Cascade Range has set off quite an academic debate. You’ll recall that Dennis Jenkins of the University of Oregon recently discovered fossilized human excrement dating to between 14,000 and 14,270 years ago. DNA analysis clearly established the coprolites as being of human origin. Now the excavators have found what is claimed to be the earliest known artefact in the Americas – a scraper-like bone tool extracted from deposits dating to between 11,930 and 14,480 before present. There are also extinct bison, camel, and horse bones in the cave. But does Paisley represent pre-Clovis occupation, as its dates might suggest? No fluted Clovis points have come from the excavations – so far. However, the presence or absence of such spear heads is not necessarily conclusive evidence either way, for the Paisley people could have been engaged in plant collecting or some other activity that did not require spears. Inevitably, the coprolites and bone scraper have reignited the tired old debate over Clovis and pre-Clovis – as if it really matters, for there’s no question that the first Americans were far more than just Clovis people. The important point is that we are now sure that humans lived in North America as early as 12,000 BC, whoever they were. The debate should be disconnected from sterile debates about a shadowy Palaeoindian culture that is poorly defined by spear points and little else. These were people, not artefacts.

Now here’s a tantalising discovery, made back in 2004, and only now publicised – wall paintings of ordinary Maya, not great lords, going about their daily business, preparing a feast. We know a great deal about the Maya elite from hieroglyphs and art, but the commoners remain largely in the shadows.
Now an Early Classic mural in a pyramid mound, part of the North Acropolis at Calakmul, Mexico, dating to between AD 450 and 500 shows people engaged in such mundane activities as preparing food, a man drinking from a bowl (the accompanying hieroglyph calls him a ‘maize-gruel person’) and another with a pot, a bowl, and a spoon. In yet another depiction, with the label ‘tobacco person’, one man holds a spatula, another a pot that probably contained a form of tobacco leaf. The discoveries include the hitherto unknown hieroglyph for a vital commodity – salt.
When the room with the murals was abandoned, the wall paintings were covered with a layer of clay, which preserved them intact for centuries. Hopefully, further excavations into the mound will reveal yet more details of the anonymous lives of ordinary Maya farmers.

The 19th century Prussian statesman Otto von Bismarck wrote of how we floated on a Stream of Time, an apt description of what we archaeologists study and how boatbuilders operate. His namesake battleship continues to take shape in a quiet British boatshop. I learn from the still-anonymous builder that ‘the hull is completely finished and I’m working on assembling the major sections of the superstructure.’ Completion is said to be due in February or early March, but remember the old boatbuilder’s saying: the only person who ever finished a ship on time was Noah – because he had to.
In the meantime, we await the denouement, the photograph, and the identity of the dedicated archaeologist model builder. Once again, pressure, pressure – and thanks to the builder for being a good sport.