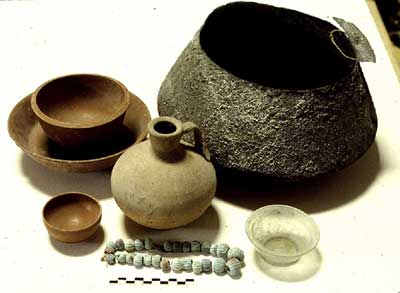 When Mount Vesuvius erupted in August 79 AD a snap-shot of Roman life was preserved for our eyes at Pompeii. Since its chance discovery in 1748, huge swathes of the city have been uncovered. The art, pomp and splendour of Pompeii have drawn the visitors and appealed to archaeologists. However, University of Leicester archaeologist Dr Penelope M Allison, who has worked on Pompeii for 20 years, has been looking at the city in the light of the everyday objects – objects that have always tended to be ignored in favour of the grander finds. Allison’s fascination with everyday objects – from cooking pots to spindle whorls and weighing scales – has led her to question how and where they might have been used, who might have used them, and what they tell us about the reality of life in Pompeii. ‘I am interested in revealing the utilitarian side of life rather than its glamorous side,’ said Allison. ‘I have been looking at how domestic utensils can reveal a great deal about people’s relationships. For example, domestic utensils give us insights to the roles of slaves and servants. We always assume that servants were kept out of sight, but this is a 19th century view and finds no real support in Pompeii.’

Thus Allison has studied the distribution of domestic material in 30 Pompeii houses and has found that this material was routinely stored in cupboards found in the main front hall, the atrium, where visitors would be received. The same is true of the main household water supply. Consequently, servants would be far from invisible, as they were in 19th century England. Rather, whenever they fetched water or dishes they would be seen by all. Household items can also be used to reveal more about everyday habits and tastes, habits that were so ‘normal’ and mundane that the ancient writers made little comment on them. Yet these every-day items have allowed Allison to speculate on such issues as the amount of cooking that went on in the main kitchens in affluent Roman households. ‘I found little braziers and flat vessels that were burned underneath that might have been used around the house, more like our barbecues, indicating that food was probably heated up in front of diners. Maybe Roman cooking smells did not offend these diners.’ Intriguingly, she has found no sets of tableware in Pompeian houses such as are found in Roman burial sites. Formal dining could have been very rare, she surmises, with people perhaps eating ‘on the wing’, much as busy families do today.

Allison has further considered how each item might have been used – and in ways that might surprise us. ‘Today we have hundreds of very specific gadgets,’ she notes. ‘But in a non-gadget world a number of things would have been used for a variety of purposes. For example, similar bone discs would be used for spindle whorls and for furniture ornamentation.’

Other finds that have puzzled her include the large quantities of heavy stone weights and scales in houses. ‘Today everything has its weight written on it when we buy it,’ she explains, ‘but in the Roman world everything would have to be weighed coming in and out of the houses. ‘Likewise, we tend to assume we know about doctors in the Roman world. We believe that whenever we find medical instruments they belonged to professional physicians,’ said Allison. However, the evidence suggests that a lot more high-level first aid went on within households. ‘We have found surgical instruments in domestic contexts and I think someone in the house was responsible for sewing up injured people. Nowadays we have a much more specialised approach to looking after the human body.’ In addition, by looking at the relationship of objects within a room yet more can be revealed. Thus when faced with a plate next to two lamps, Allison will ask why the three items have been put together. Might this indicate some kind of offering? What were the lamps for? What was the situation that brought them together, and how would the people have lit this space?

The implications of Allison’s research stretch beyond Pompeii itself and will impact on the interpretation of other Roman sites. Because of the suddenness of its destruction, Pompeii offers a context for the artefacts that are found, in a way that virtually no other site can.
Penelope Allison’s latest research is published in her book The Insula of the Menander in Pompeii III: The Finds, a Contextual Study, Oxford University Press.