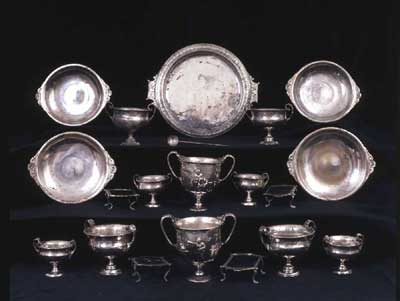 A set of ancient silverware from Pompeii, touted as one of the most important finds of its kind, has finally been unveiled by conservators. The set of 20 hand-crafted goblets, plates and trays had been well preserved in the mud and ash after Vesuvius’ deadly AD 79 eruption. Though discovered five years ago, it has required the latest techniques to separate the pieces.

The silver was found bundled into a wicker basket. ‘It seems one man bundled the family silverware into a wicker basket and ran for his life. He hid the basket in a stairwell in some public baths on the outskirts of the city before being overcome by fumes. His skeleton still flanks the objects’, explained excavations’ director Pietro Giovanni Guzzo.

The man, his basket and the silver were discovered by archaeologists on watch during the building of a new motorway near Pompeii. However, the wicker basket and its contents had congealed into a solid block. Conservators had to use x-rays to work out how to separate the items, and then worked meticulously to remove the heavy encrustation that bound them. The remains of the basket are still under chemical treatment in order to preserve the vegetable fibre.

The collection includes solid silver plates and goblets, all beautifully polished and weighing over 4kg. There are also two exquisitely engraved wine cups, a set of small dishes, a large serving plate with an elaborately chased border, a spoon, plus some tiny, finely worked silver trays for appetisers.

No new treasure trove of this quality from Pompeii has been seen for more than 70 years. In the 19th and 20th centuries, two other similar and larger hoards of table silver were excavated and are on show in the Louvre museum in Paris and at the National Archaeological Museum in Naples. The new find will be put on show at the Naples museum during 2006.