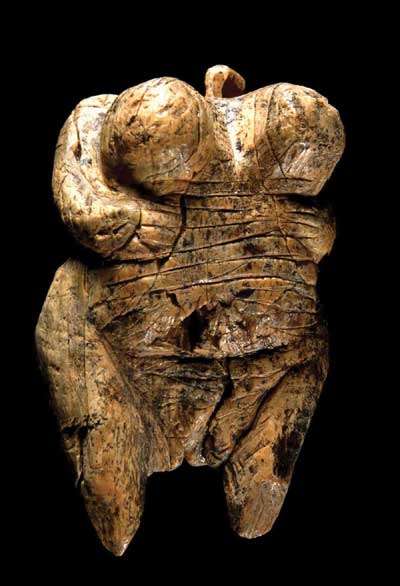 A cave in the Swabian Jura region of south-western Germany has yielded a remarkably well-preserved mammoth-ivory figurine that has been dated to at least 35,000 years ago, making it one of the oldest known examples of figurative art. Discovered 3m below the floor of the Hohle Fels Cave, the 60mm statuette depicts a female with exaggerated breasts, stomach, thighs and vulva. A suspension ring in place of the head suggests that the carving might have been worn as a pendant.

The emphasis on sexual attributes is reminiscent of the so-called ‘Venus’ figurines of the European Gravettian, which typically date from between 25,000 and 30,000 years ago; this figure predates such female representations by some 5,000 years. In a paper announcing the discovery, published in Nature (Vol 459, 14 May 2009), Professor Nicholas Conard, of the University of Tübingen, discusses the problems associated with the dating of material from this period, and says that the figurine is probably even older: based on the cave stratigraphy it is perhaps ‘of an age corresponding to the start of the Aurignacian, around 40,000 calendar years ago’, and is thus ‘the earliest example of figurative art worldwide’.

The context within which the figurine was found is overlain by 1m of deposits that contain rich assemblages of Aurignacian lithics, organic tools and personal ornaments, as well as three further examples of figurative art: a duck-like bird, a horse’s head and a human body with the head of a lion, dated to about 30,000 years ago. Although the statuette is the only sculpture found within the lower context, ivory-working debris has been recovered from the basal deposits at Hohle Fels, suggesting that further carving was carried out in the cave at an early date and that the figurine might not have been unique.

Until now, archaeologists have believed that strong and aggressive animals and shamanic depictions of therianthropic figures (part man, part beast) came before the representation of the human figure in sculpture and cave painting. Now, says Professor Conard, we have to radically change our view of the earliest Palaeolithic art. ‘It also reinforces arguments,’ concludes Professor Conard, ‘that have been made for innovative cultural manifestations accompanying the rise of the Aurignacian in the upper Danube region shortly after the migration of early modern humans into Europe.’ •