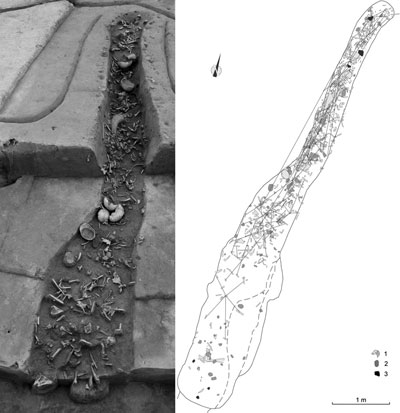 Feasting of a different kind was the subject of a paper in the latest issue of Antiquity (www.antiquity.ac.uk) reporting the evidence of mass cannibalism at a Neolithic site near Herxheim in Germany.

In the measured language of academic journal publication, the authors – Bruno Boulestin, Andrea Zeeb-Lanz, Christian Jeunesse, Fabian Haack, Rose-Marie Arbogast and Anthony Denaire – say that ‘debates about the importance of violence during the Neolithic, and how it should be qualified (should we speak of war?) remain heated’, but that the site, with its numerous bone-filled elongated pits and ditches, provides ‘strong evidence that the site was dedicated to ritual activities in which cannibalism played an important part’.

Underpinning this conclusion is the grim tally of mutilated and disarticulated bones from the site, characterised by the type of skinning marks, cutmarks, scrape marks and fractures normally seen in animal butchery. Skulls have been cracked open to expose the brains, tongues have been cut out and long bones have been split and the marrow scraped out. Some bones show unmistakeable signs of having been chewed. Altogether, the remains of some 500 humans have been found, but half the site remains to be excavated, so the total could eventually exceed 1,000. Buried with the remains were numerous dog bones, as well as cattle legs and horn-cores. Artefacts, including pottery, had been systematically broken before being deposited.

The authors rule out cannibalism for the simple purpose of survival because of the numbers of victims involved. Instead, the deposits have the characteristics of ‘standard, repetitive and strongly ritualised practice’. Funerary cannibalism is ruled out, too, because, again, it is unlikely that so many people would have died over the short time period represented by the deposits.

The very varied and sometimes distant origin of the ceramics at the site leads the authors to conclude that ‘people came voluntarily to Herxheim, sometimes from several hundred kilometres away, in order to take part in ceremonies in which cannibalism – of a sacrificial nature – would have played an important part’. They see this as supporting the theory that a deep crisis shook Central Europe at the end of the Linear Pottery Culture (around 4500 BC) of a kind that led to violent behaviour and a reversal of traditional practices concerning death, leading to violation of the physical integrity of the deceased.