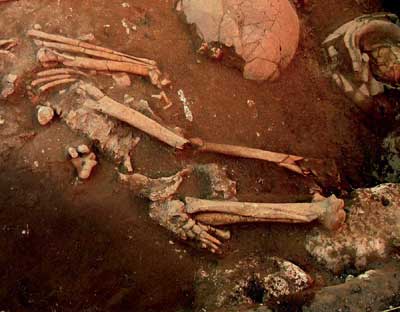 Analysis of skeletons from the earliest-known cemetery in the Pacific is providing new clues about the early occupation of the region. The cemetery, on the idyllic island of Efate, has produced 50 burials. Seventeen have been investigated for isotopes and trace elements in their teeth and the results are proving dynamite. The teeth are producing vital insights into the lives of the early colonists of the Pacific islands. The cemetery was discovered in 2003 at the site of Teouma by an international team led by Prof. Matthew Spriggs and Dr Stuart Bedford of the Australian National University, in cooperation with the Vanuatu National Museum. By analysing the strontium, carbon and oxygen isotope signatures of the teeth, the team has uncovered crucial information about the erstwhile islanders’ geological origin, their diet and likely source of their drinking water throughout life.

By looking at these signatures team member Dr Alex Bentley of Durham University, has identified that four of the 17 must have been migrants to the island. These four had migrated from coastal locations – potentially from outside the Vanuatu Region. Most of the 17 analysed individuals had a diet mainly consisting of local plants and seafood, but the minority of four had a coastal yet still terrestrial diet. Furthermore, the oxygen levels of these four were significantly higher than those of the local skeletons, indicating that they were from a distant location; possibly as distant as the Solomon Islands or even the Bismarck Archipelago just east of New Guinea. Of further interest was the observation that this minority group buried their dead differently from the majority: with their head to the south, while one even had three heads – identified as ‘local’ heads – on his chest, whereas the rest of the group was buried in more varied, non-southerly directions.

‘The combination of the way in which these new people were buried plus the information we have about their possible origin reveals a richness of social complexity. Although they must have travelled long distances by sea, they were nonetheless farmers as much as they were fisher folk.

Here we have the bodies of prehistoric Pacific mariners, people who were among the best navigators on earth for the next 2,500 years. To my mind, their distinctive burials among the rest of the population could indicate they were some of the first colonists of the island, perhaps the group’s founding fathers and mothers, or otherwise admired by the locals for their amazing longdistance travelling abilities’, explained Dr Alex Bentley.

The team hopes the cemetery will reveal yet more information about these early settlers. Indeed, an ongoing project on the health of the Teouma people is also being led by Dr Hallie Buckley of the University of Otago.