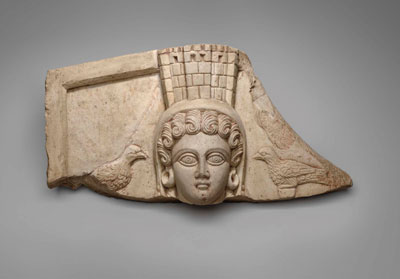 Multiculturalism might be thought to be a modern preoccupation, but the inhabitants of one ancient city would have begged to differ. Founded c.300 BC by a Macedonian successor of Alexander the Great, Dura-Europos was a cosmopolitan melting pot inhabited by an international and multilingual community of Christians, Jews, and polytheistic pagans.

At the crossroads  of civilisations
This unusual diversity stemmed in part from Dura-Europos’s location at the meeting point of the Mediterranean and Near Eastern worlds. It was built at the intersection of a major east–west trade route and the commercial highway of the Euphrates river.
However, other peoples were also gaining influence in the east, notably the Parthians in northeastern Iran. In 113 BC, Dura-Europos fell before their advances, becoming an important fortress and trading post on the western edge of the vast Parthian Empire. In AD 164 it was conquered again, this time by the army of the Roman emperor Lucius Verus. When the Parthian Empire finally crumbled, in its place rose a much more dangerous enemy: Sassanian Persia.
By the 3rd century, this dynasty from southern Iran was the main rival of the eastern Roman Empire. Their armies made devastating incursions into nearby Roman provinces and, in AD 256, they turned their attention to Dura-Europos. After a vicious siege (see CWA 38), the city was finally destroyed.

The Syrian Pompeii
Following this defeat, Dura-Europos was abandoned, so that when the city was rediscovered 1,600 years later, it was so well-preserved that archaeologists dubbed it ‘the Pompeii of the Syrian Desert’. Furthermore, while preparing for the Persian attack, Roman soldiers had built a massive earth rampart against the city wall, entombing, in their haste, what is now the world’s best-preserved example of an ancient synagogue, and the earliest- known Christian house-church.
Dura-Europos lay undisturbed until 1920 when, while digging a rifle pit, Indian troops under British command stumbled on amazingly fresh-looking wall paintings depicting scenes of Syrian priests and Roman soldiers. Since then, thousands of archaeological treasures have been recovered, as well as numerous places of pagan worship, including a Roman mithraeum, and the spectacular ‘Temple of the Palmyrene Gods’ – where the all-important wall paintings were uncovered.