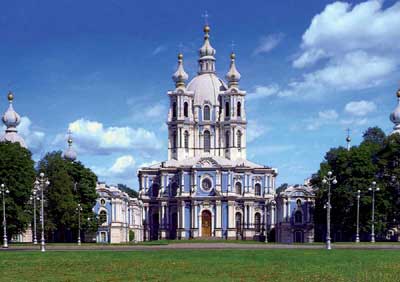 St. Petersburg, also known as ‘Venice of the North’, is famed for its exquisite historic buildings, network of canals, and its 400 bridges. The city is the result of a colossal urban planning project initiated in 1703 by Peter the Great. Its horizontal, unified, and delicate skyline has been preserved intact over the ages. It is because of its historic integrity and architectural stylistic unity that the city was granted UNESCO World Heritage status in 1990. Now, however, its skyline and its UNESCO status is under threat.

Gazprom, Russia’s energy monopoly, wants to build its headquarters in the city. And for Gazprom, the only way is up. Their proposed scheme is a 396m glass-clad skyscraper. The tower has been designed by UK architectural practice RMJM, and would rise 23m taller than New York’s Empire State Building, be eight times higher than the maximal surrounding building height of 48m, and over three times taller than the tallest spire of St. Petersburg’s Peter and Paul Cathedral. The ‘Gazprom City’ skyscraper would lie directly across the River Neva from the Baroque gem of Smolny Cathedral and the historic skyline will be forever altered. In response, Europa Nostra (www. europanostra.org)- the Pan-European Federation for Cultural Heritage representing 250 heritage organisations throughout Europe – has launched an urgent appeal to President Vladimir Putin calling on him to intervene for the safeguarding of the historic core of St. Petersburg. If no urgent action is undertaken, they argue, this unique city will be ruined. They join in the widespread opposition levelled by the international heritage community and the general public in Russia. If the ‘Gazprom City’ project is not brought to a grinding halt, St. Petersburg faces the likelihood of deletion from the World Heritage List next year.

In its appeal, Europa Nostra urges President Putin to ensure that the current zoning regulations applicable at the selected location are respected, and that an alternative location far from the historical centre be selected for the Gazprom City project. This is to ensure that the historic urban landscape of St. Petersburg be preserved for the long-term benefit of present and future generations.

But should cities be preserved in aspic? CWA approached Emmanuelle Morgan, former caseworker for the UK’s 20th Century Society, an NGO whose aim is to protect modern architecture. ‘As a building, I like the fact that it looks contemporary and light, with its needle form and transparent glass. However, while this building may be well-considered, it would of course set a precedent and could potentially open the floodgates for other tall buildings to erupt all over St Petersburg’s skyline.’ As Europa Nostra emphasises: in this emblematic case, it is vital to find an appropriate balance between contemporary architecture and the preservation of heritage.