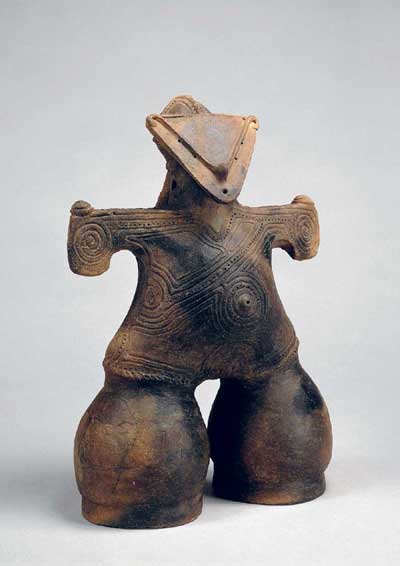 This autumn [2009], the British Museum is offering a spectacular free exhibition featuring 67 delightful Japanese ceramic figurines, known as ‘Dogû’. These abstract figures, with their recognizably human or animal features, were made during Japan’s Jômon period (c.12,500-300 BC). The objects have been lent by many different public and private collections in Japan. Three have been designated National Treasures of Japan, including the so-called ‘Venus’ from Tanabatake, Nagano prefecture and Dogû with palms pressed together from Aomori prefecture, designated by the Japanese government in 2009. An additional 25 examples rank as Important Cultural Properties and Important Art Objects. This will be the first time that such a wide range of the finest dogû have been brought together in a single exhibition.

The figurines provide a tantalising link to the mysterious yet remarkable Jômon people, prehistoric foragers who lived in the temperate forests that covered the Japanese archipelago. The Jômon people appear to have been the first people to use pottery, in a tradition that stretches almost 13 millennia.

Dogû developed within this context and about 18,000 figurines have been excavated from sites throughout Japan. The best examples herald from central and eastern regions -from where most of the current exhibits are drawn.

Dogû are made from high quality pottery and come in a variety of shapes featuring intriguing decoration and geometric designs. The techniques include modelling, clay appliqué, marking with twisted plant fibres (jômon means ‘cord-marked’) and burnishing. Often hand-sized, one of the largest complete figures in the exhibition, from Chobonaino, Hokkaido, is some 42cm high. Moreover, fragments have also been found of examples that must originally have been over 1m in height – such as a head from Shidanai, Iwate prefecture.

In addition to their often elaborate decoration, some dogû were painted – typically with red pigments – or covered in lacquer. They often take somewhat netherworldly forms – with heart-shaped faces or triangular pointed heads. Some squat, perhaps in childbirth, others appear to be praying, still others apparently wear masks, such as the magnificent Hollow masked dogû discovered in 2000 in Nagano prefecture. Many dogû have recognisably female characteristics, while others appear less gender-specific. They may be hollow or made of solid clay.

There is much debate about what dogû meant to Jômon people and how they were used, particularly because many seem to have been deliberately broken before scattering or burial. It is likely that dogû fulfilled a range of uses: as embodiments of spirits, venerated and revered; sometimes buried with the deceased to guide them to the next world; and most often fragmented during or after their use in Jômon rituals. Such rituals were perhaps intended to secure safe childbirth, or ensure a successful hunt.

In the modern era, dogû have served as a potent source of artistic inspiration, and in recent decades they have even featured in popular-culture ‘manga’ comics and computer Playstation games. It is testimony to the power of dogû that they can serve, simultaneously, as symbols of prehistoric Japan; entrancing works of art; and protagonists in contemporary culture.