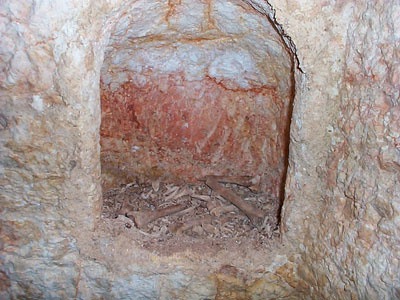 The DNA of a man who died between 1 and 50 AD, and who was buried in a tomb on the edge of the Old City of Jerusalem, has revealed that he suffered from leprosy – the earliest proven case of the disease.

In addition, the shroud in which the leprosy sufferer was buried provides a rare insight into the character of funerary shrouds at the time of Jesus. It is, says a leading textile historian, very different from the Turin Shroud, which some believe is the burial cloth that was used to wrap the body of Jesus.

Finding the shroud at all is a very rare event: normal practice at the time was to wrap the deceased in cloth and lay them in a tomb until the flesh had decayed, then retrieve the bones and place them in a stone chest, or ossuary for secondary burial. Unusually, in this case, the tomb had been sealed with plaster and no secondary ossuary burial had taken place. Perhaps this was because of the disfiguring and contagious nature of his condition, says Professor Mark Spigelman, of the Sanford F Kuvin Center for the Study of Infectious and Tropical Diseases at the Hebrew University of Jerusalem, a member of the international team whose bio-molecular investigation has established that the man suffered from leprosy and died of tuberculosis.

Even so, the occupant of the ‘Tomb of the Shroud’, located in the lower Hinnom Valley, had clearly not been be ostracized. The location and size of the tomb, in a privileged section of the cemetery with a view towards the Temple, next to the tomb of Annas, the high priest (AD 6-15), the father-in-law of Caiaphas, the high priest who betrayed Jesus to the Romans, suggests that the shrouded man was a priest or a member of the aristocracy.

This is also the first time fragments of a burial shroud have been found from the time of Jesus. Textile historian Dr Orit Shamir characterises this as a ‘simple two-way weave’. Based on the assumption that this is representative of a typical burial shroud widely used at the time of Jesus, Dr Shamir concludes that the much more complex weave of the Turin Shroud suggests it did not originate from 1st century Jerusalem.