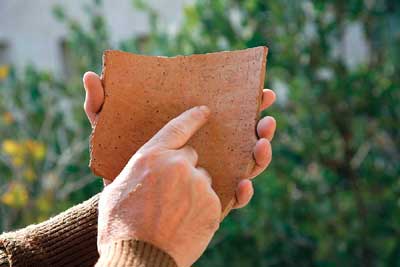 Five lines of faded characters written in ink and divided by black lines on a scrap of pottery measuring 15 by 15cm are being claimed as the earliest example of Hebrew text yet found. The ostracon was discovered in a water conduit during the excavation of the five-acre Elah city-fortress at Khirbet Qeiyafa, near the town of Beit Shemesh, 20 miles from Jerusalem. Burned olives found in pits associated with the sherd have been carbon-dated at Oxford University to around 975 BC. The writing in a proto-Canaanite script has not been fully deciphered, but the words for ‘king’, ‘judge’, and ‘slave’ have been recognised.

The citadel stands on the frontier between the territory of the Israelites and the Philistines, close to the large Philistine capital of Gath. Yosef Garfinkel, lead archaeologist at the site and professor at Jerusalem’s Hebrew University, believes the location offers clues to the origin of the David and Goliath story in the Bible: the famous battle between the giant Goliath and the shepherd boy who went on to be king of the Jews and founder of Jerusalem, ‘might be a metaphor for frequent battles between people of the Elah fortress and the neighbouring Philistines’, he said.

The shard is evidence, Garfinkel believes, that the Israelites were a far from backward and illiterate desert tribe and that David was a head of a powerful civilisation with an administration that employed trained scribes. Others have questioned the link to King David; Hani Nur el-Din, professor of archaeology at Al-Quds University in Jerusalem, said ‘Israeli archaeologists are always trying to link what they find to the Bible and not to other contemporary historical texts; further digging might dispel biblical links to the site’.