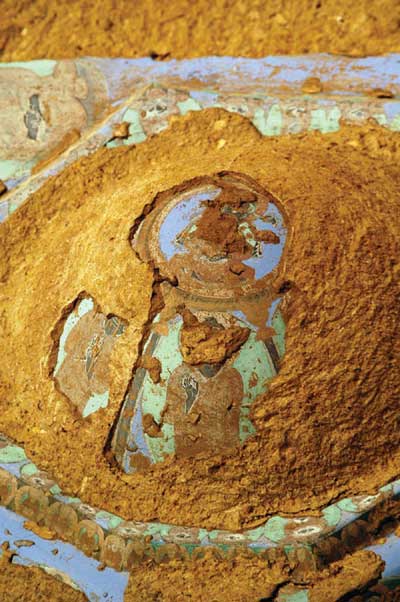 Researchers studying the remains of the two giant Buddhas of Bamiyan, blown up by the Taliban in 2001, have discovered that some of the murals on the walls of the caves behind the statues were created using oil-based paints as early as the mid 7th century AD.

Some 50 caves are painted with scenes from the life of the Buddha, and 12 of them have oil-based paints, in which walnut and poppy seed oils were used as the binding medium for ground-up mineral pigments. The development of oil painting in western art is traditionally ascribed to 15th century Flemish painters, such as Jan van Eyck, though it was Leonardo da Vinci who mastered the technique of using oil, rather than egg white, as a medium for binding ground up paint pigments, thereby achieving the subtlety of shading and modelling for which he is famous.

Paint samples from the cave were analysed by scientists from the National Research Institute for Cultural Properties in Tokyo (Japan), the Centre of Research and Restoration of the French Museums-CNRS (France) and the Getty Conservation Institute (United States) using the European Synchrotron Radiation Facility (ESRF) in Grenoble, France. The latter uses extremely bright beams of light to analyse the components of the murals, which were created by superimposing multiple layers of paint, some of which can be very thin.

‘This is the earliest clear example of oil paintings in the world,’ said Yoko Taniguchi, leader of the research team. ‘Oils were used by ancient Romans and Egyptians, but only as a binder for medicines and cosmetics’, he added. Among the diverse materials used to create the murals, the research team also identified hide glue and egg, used as binders, and lead carbonates used to create white highlights.

Built during the 6th century, the statues of Bamiyan were carved directly from the sandstone cliffs, with details modelled in mud mixed with straw and coated with stucco. The stucco coat was painted in multiple colours. The paintings show scenes from the life of the Buddha, who is depicted in vermilion robes seated cross-legged amid palm leaves. Showing the influence of Chinese, Indian and Eurasian art, they are probably the work of artists who travelled on the Silk Road, the ancient trade route from China, across Central Asia’s desert to the West.

‘For political reasons, research on paintings in Central Asia is scarce’, Yoko Taniguchi said. ‘We were fortunate to get the opportunity from UNESCO, as a part of a conservation project for the World Heritage site Bamiyan, to study these samples and we hope that future research may provide deeper understanding of the painting techniques along the Silk Road’.