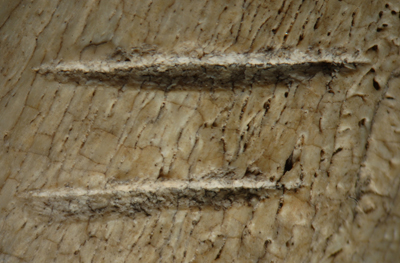 The butchered bones of cow and goat-like animals from a riverbed in Dikika, in the Afar region of northern Ethiopia, show early humans were using tools 3.4m years ago – more than a million years earlier than previously thought. Until the discovery, it was believed tools were first employed by Homo habilis – hence the name ‘Handy Man’ – 2.3m years ago.

The bones bear the distinctive marks made by stone tools to slice and scrape meat from the carcasses, and to crush the bone to expose the marrow. They were discovered just 200m from the site where the 3.2m-year-old skeleton of Australopithecus afarensis (nicknamed ‘Lucy’) was found in 1974.

‘A small fragment of stone was embedded in one of the cut marks,’ said Shannon McPherron of the Max Planck Institute for Evolutionary Anthropology in Leipzig, one of the finders of the bones. Chris Stringer, Head of Human Origins at the Natural History Museum in London, commented that ‘what we need from these sites now is evidence of the stone tools themselves, so we can see if they were manufactured or were natural stones that happened to be used for butchery.