View from the Field: The Great Pyramid Egypt 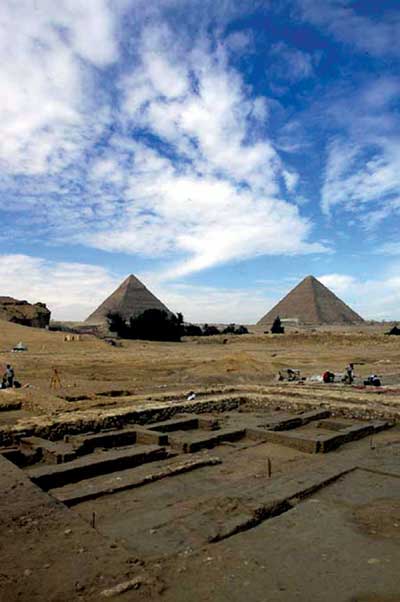 The World Heritage Site of Giza, just to the west of Cairo, is home of the three largest pyramids – the most complete of the remaining Seven Wonders of the World. But it was also once home to the builders of the pyramids: the architects, overseers, skilled artisans, corvèe labourers, supply staff and some of their families, all of whom were housed in a 9ha town just south of the Sphinx.

The settlement, known as the Pyramid Builders’ Town, was one of the major Egyptian urban centres of its time. It was probably established during the reigns of Khafre (2558-2532 BC) and Menkaure (2532-2502 BC), the commissioners of the second and third pyramids on the Giza Plateau.

The site is currently under investigation by the The Giza Plateau Mapping Project (GPMP). The project started in 1988 and excavation of the settlement has intensified since 1998. To date, the archaeologists – under the direction of Prof. Mark Lehner of the Oriental Institute of Chicago and Harvard Semitic Museum, USA – have uncovered 30 distinct areas. These include a large administrative building, mud-brick houses, a hypostyle hall, bakeries, workshops, and four sets of eight galleries to house up to 2000 working men – probably the corvèe labourers.

Environmental evidence from the site has shown that the pyramid builders had a good diet of meat, fish, pulses, bread and beer, with the overseers and other administrators getting the better cuts of meat. There is also limited evidence for spinning and weaving at the settlement thanks to the discovery of weaving tools and some cordage and textile fragments.

Last season, the team excavated more administrative buildings, domestic structures, roadways and faience production facilities. They also undertook an intensive survey of a cemetery that partly overlies the ancient settlement, which was in use between about 660 BC and AD 300 – long after the construction of the pyramids.

They also re-excavated and recorded the nearby settlement of Queen Khentakawes, the wife of Userkaf, the first king of Dynasty V (c. 2494-2487 BC). The settlement includes a series of interlocking buildings – each typically comprising a central room with two or three ancillary rooms attached to it. Two of the rooms contained circular grain pits, and the southern or back room in each block served as the kitchen area as indicated by ovens and ash deposits.

The team has just begun the autumn study season from September to December. This will include the analysis of artefacts – including some 20,000 lithic tools – from the last and previous seasons’ excavations.

Hierakonpolis (a Greek name meaning City of the Hawk) – or Nekhen, as it was initially known – lies in Upper Egypt, not far from Aswan. It was one of the most important and largest sites in Predynastic Egypt (4,000 – 3,050 BC). Indeed, its importance was such that it continued in use throughout the Pharaonic period.

This season, Dr Renée Friedman of the British Museum continued as sole director after the sad and untimely death of her co-director Barbara Adams. Friedman’s team continued to work in the Predynastic settlement and kiln area, and in the élite cemetery.

However, it was in the cemetery that startling new finds were made. There they continued to work within a funerary enclosure that measures a mighty 16m x 9m, and seems to have belonged to a local chieftain/king. An elephant burial located just outside the enclosure may suggest that the ruler may have been associated with elephants (some of the early kings took the name ‘Elephant’).

Dated to c. 3700 BC, his tomb complex appears to have had a large entrance, two burial pits with superstructures over them, a surrounding perimeter fence, and an offering chapel, and all topped off with a colossal statue.

This season, the team found further evidence of this statue – which seems to have been of a god or king – broken into hundreds of limestone fragments. Added to this, they found more bodies, possibly those of the leader’s retainers, but more importantly two funerary masks, which indicate that at least two of these bodies are those of the tomb owners. In addition, they discovered further evidence of posts – some with foundation offerings, including burnt ostrich egg shell, pots, goat or sheep bones, and an ebony mace handle. Evidence of slat fencing covered in matting; plaster; and traces of paint also came to light.

This is certainly the most elaborate and largest mortuary complex so far found in Egypt from this early date. Current thinking is that it was deliberately destroyed by smashing the statue and burning the structures.

Finally, the team spent a focussed effort conserving the ‘Fort’ – a huge mud-brick ceremonial enclosure built by Khasekhemwy, the last king of Dynasty II (c. 2700 BC). They toiled to remove the windblown sand and to repair some of the walls. To do so, they used new mud-bricks made to a similar formula as the originals but with HK2005 impressed on them.

This view from the field comes from G. J. Tassie, Managing Director of the Egyptian Cultural Heritage Organisation – www.e-c-h-o.org.

Previous Pipeline Through Azerbaijan, Georgia and Turkey Next In Search of the Red Slave