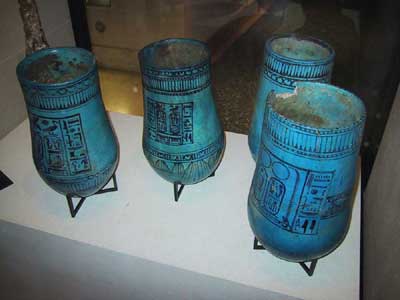 On display in the Louvre museum in Paris are four blue-glazed faience jars adorned with hieroglyphs and bearing the name Rameses II. For the past century, the vessels have been labelled Canopic jars -the sacred mortuary jars containing the embalmed innards – of the great Egyptian Pharaoh Rameses II. But the four jars are not quite what they seem.

An analysis by French chemists, published in the Journal of Archaeological Science, has revealed that the jars actually contain ordinary cosmetics, and were produced long after Rameses II died. The story of the four jars is that they arrived in the Louvre in 1905 and seemed to contain embalmed organs including a trace of what appeared to be heart tissue. However, Rameses’ mummy still has its heart – this was the one organ ancient Egyptians left inside mummies so it could be weighed in the afterlife by the god Thoth. So whose heart was it in the jar? Even before analysing their contents, Jacques Connan of the University of Strasbourg, France, referring to the typological study of the jars by Christophe Barbotin in the Louvre Museum, doubted that these were even Canopic jars containing internal organs: ‘the jars looked like the pots of unguents found in King Tutankhamun’s tomb, among others, not like other Canopic jars,’ he explained. With the Louvre’s permission, Connan’s team sampled the traces of material in the jars, and analysed them using mass spectrometry and gas chromatography – techniques harnessed in the petroleum industry to identify complex organic mixes. They found no evidence of beeswax, bitumen or other materials common in Egyptian embalming. Instead, the composition of free fatty acids was typical of nonruminant animal, and their carbon isotope composition matched pig fat. There were also unusual molecules formed from fatty acids joined with sesquiterpenoid alcohol found in pine or cedar, woods ancient Egypt imported from the Levant. Connan and co-workers concludes that the jar probably held scented ointment made by heating aromatic wood in fat, of the type Egyptians used to anoint their heads, and sacred images. The calibrated carbon-14 date for the material is 1035 BC, give or take 50 years. They were therefore filled at least 130 years after Rameses II died in 1213 BC. A yellowish ‘resin’, a remnant of the embalmed packages the jars contained in 1905, turned out to be pure mastic tree resin – which is still used in foods and embalming, but it dates from 275 BC. What does all this mean? A feasible conclusion is that the jars were in fact made for a temple to the sun god Amun-Ra. Rameses II built the temple and hence his name is on the jars. Their appearance and their contents suggest they were probably used to hold ritual ointments. The late date of the yellow resin indicates that the antique jars were later recycled as containers for resinembalmed remains. ‘There are many objects like this in museums that have been attributed, but never verified’, observed Connan.