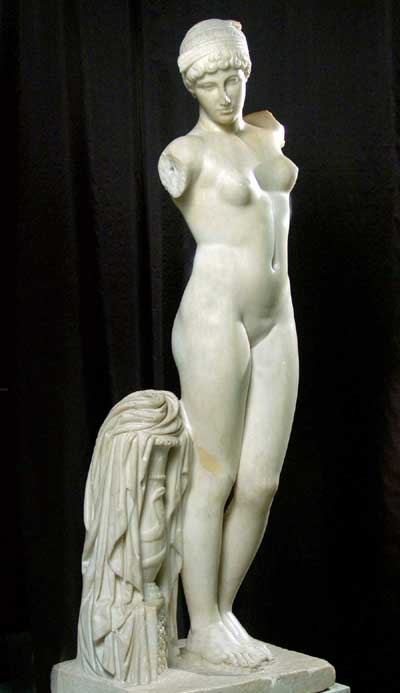 As the exhibition illustrates, the powerful ruler and femme fatale, still sparks interest: her very name imparts notions of desire, awe and a degree of fear. For Cleopatra was revered and hated by some of the most powerful men of her time: she was the lover of both Julius Caesar and Mark Antony, while Augustus viewed her as a threat to the Roman Empire and destroyed her. Indeed, after her death, Augustus instigated a propaganda campaign in which she was slandered as a royal whore (a recurrent theme in history – such also befell the Phoenician princess Jezebel). Though Augustus wanted to erase all memory of her, the opposite occurred: the myth of Cleopatra was born.

The German exhibition, entitled Cleopatra and the Caesars, draws on new research theories to examine the historic Cleopatra, while at the same time illustrating history and art’s idealised (or demonised) view of her life and deeds. Thus the centre-piece of the exhibition is one of the most famous sculptures of classical antiquity (pictured), the so-called Venus Esquilina, which is on loan from the Capitoline Museum in Rome. Some, notably the Italian philologist Licinio Glori in 1955, have proposed that this statue in fact portrays Cleopatra VII.

Why might Cleopatra have been depicted as Venus? Among many reasons outlined in the exhibition, Cleopatra’s people identified her with Isis, the goddess of love, i.e. in the same category as Venus.

In addition to the Venus Esquilina, the exhibition has further artefact loans from the Capitoline Museums and from other major collections, including other never-before displayed items that relate to Cleopatra’s life. These include a portrait bust of Mark Antony, and a second bust depicting Gaius Maecenas. Maecenas was the closest advisor to Caesar Augustus and the man who supported him in his propaganda war against Cleopatra.

Recently-identified images of Cleopatra and Mark Antony’s three children are also on show, as are the female Pharaoh’s enemies that included, first and foremost, Octavian, known to history as Caesar Augustus.

Civil war followed the death of Julius Caesar in 46 BC and Antony and Octavian were allies in their struggle for the domination of Rome. Antony needed the military and material support of Egypt for his planned campaign against the Parthians and turned to Cleopatra. Like Caesar before him, Antony also succumbed to her charms. He became her lover and later her husband, the father of her three younger children and her key supporter. In the following years Antony and Cleopatra mutually assisted each other in expanding their individual territories. However, Mark Antony was defeated in his campaign against the Parthians and paid for it with the loss of almost half his army.

This defeat was a welcome opportunity for Octavian to begin a propaganda war against Antony which also focused on Cleopatra.

She was denigrated as an adulteress, a decadent oriental concubine and a power-crazed enemy of Rome. At the end of 32 BC at Octavian’s instigation, Antony was deprived of all his offices.

Cleopatra and her lover prepared themselves for the impending war with Octavian. On September 2, 31 BC, a decisive navel battle was fought near Actium in which Cleopatra and Mark Antony suffered a crushing defeat. As a result, Antony ended his life by falling upon his sword. Cleopatra fled to a temple when Octavian landed in Alexandria. According to the chroniclers in Rome, when she realised that she would be led in chains through the city in the triumphal procession, she took her own life.

As the exhibition explains, Cleopatra VII was the last and most famous in the complex three thousand year dynastic history of Egyptian Pharaohs – divine rulers who guaranteed the unity of society in the richest country of the Ancient World. She herself was revered by her people as the Queen of Kings and attempted to secure the existence of her kingdom and to pass it on to her children during a time marked by great upheaval. To do this, she used every means at her disposal. She was not only a power-conscious, even unscrupulous ruler, but also the mother of four children – and so picked her eldest son to rule the world but he was executed at 17, his next oldest brother shared his fate and the third died young. Her daughter Cleopatra Selene however, went on to become Queen of Mauritania.

In addition to the sculptures, the second part of the exhibition is dedicated to around 20 paintings depicting Cleopatra by artists from the 16th to the 19th centuries. These present a gamut of artistic interpretations of well-known events in the life of Cleopatra. The star image is a double-sided drawing by Michelangelo which depicts Cleopatra’s legendary death; also on show are works by Johann Heinrich Tischbein, Angelika Kaufmann and Hans Makart. Loans for the exhibition come from around the world including from the Louvre, Paris; the Hermitage, St. Petersburg; and the Brooklyn Museum, New York.