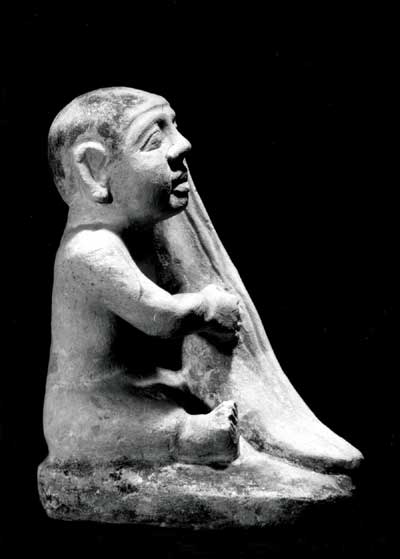 According to a study undertaken by paediatrician and clinical geneticist, Dr Chahira Kozma, the ancient Egyptians respected dwarfs, and did not see this condition in an adverse light.

Dr. Kozma, of the department of paediatrics at Georgetown University, reviewed published reports about biological remains, together with artistic evidence of dwarfism in ancient Egypt.

In terms of the skeletal evidence, dwarfs appear in the record right from the Predynastic Period, with the earliest evidence coming from the ‘Badarian Period’ (4500 BC). Several skeletons of dwarfs also appear in the Old Kingdom (2700 – 2190 BC). Of special interest is the fact that some dwarfs were members of households of high officials and were esteemed enough to receive lavish burial sites in the royal cemetery close to the pyramids. This may indicate that dwarfs received positive discrimination.

With respect to the artistic evidence, Kozma reviewed reports regarding images of dwarfs on tomb walls, vase paintings, statues and other art forms. Dwarfs were depicted in at least 50 tombs. There, pictures showed dwarfs employed in a variety of roles – among other tasks, as personal attendants, as jewellers, as dancers and entertainers. This suggests to the researcher that dwarfs were well-integrated into society.

However, dwarfs also gained a sacred status: two key gods of ancient Egypt, Bes and Ptah, were dwarfs. Bes was a protector of sexuality, childbirth, women and children. His temple was recently excavated in the Baharia oasis in the middle of Egypt. Ptah was associated with regeneration and rejuvenation. Wisdom, writings and moral teachings in ancient Egypt thus commanded respect for dwarfs and indeed other individuals with disabilities, according to Kozma.

Kozma’s research is published in the American Journal of Medical Genetics. As she explained to CWA ‘my aim has been to bring this information to physicians and especially to geneticists who work with people with short stature to inform them how this ancient civilization handled disabilities with respect.’ Indeed, she concludes that both the burial sites and artistic sources indicate that ‘dwarfs were accepted in ancient Egypt. Their recorded daily activities suggest assimilation into daily life, and their disorder was never shown as a physical handicap.’ Though it remains possible to marshal the evidence in other ways – this remains a viable interpretation.

For further information on this subject, Kozma recommends the book Dwarfs in Ancient Egypt and Greece by Veronique Dasen, 1993.