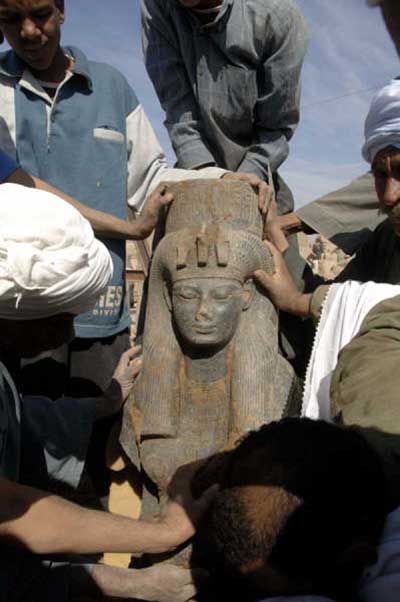 The Valley of the Kings in Luxor is an immensely popular attraction and the site is now receiving in the region of 7,000 visitors a day, in fact, in 2004, total admissions were 1.8 million. This popularity however has its drawbacks. To ensure that the site survives for future generations to study and visit a number of new measures are underway.

One of the most observable changes is the construction of a new Visitors’ Centre. Those of you that have visited the Valley of the Kings in the last few years will be aware that the cafeteria at the entrance to the site was closed and was standing neglected and becoming something of an eyesore. In the last year, the building has been demolished and rising from its ruins has appeared a new Visitors’ Centre, which was opened this March by the Egyptian Minister of Culture, Farouq Hosni.

The centre, funded by the Japanese International Cooperation Agency (JICA) and the Supreme Council for Antiquities (SCA), provides an overview of the history of the valley, a guide to tomb construction techniques, and information on ancient Egyptian gods among other displays. It also offers information on appropriate visitor behaviour within the tombs – for example, no touching of the walls, no photography and no eating and smoking.

Within the centre, The Theban Mapping Project (TMP) designed the tri-lingual display panels that provide the narrative to the whole visitor project. This is the culmination of a long project by the TMP to enhance and protect the surroundings of the Valley of the Kings. As one of the archaeologists involved in the work of the TMP, it has been immensely rewarding to see this project develop. This work has involved the complete mapping of the valley and its tombs and more recently the completion of a detailed condition assessment of all the open tombs. To do so, we collected a photographic record of every wall and relief in each of the tombs and this was followed by an assessment by a TMP conservator of its current condition. Alongside this, we completed a site management masterplan (funded by the World Monuments Fund), whose goal is to protect the site from the plethora of problems related to the huge volume of visitors, such as the immense damage done by human breath on the tomb reliefs, and also to minimise the effects of natural threats such as flash flooding. The implementation of the masterplan will hopefully begin later this year.

Excavations are again underway at the Karnak temple complex in Luxor by archaeologists from The John Hopkins University (JHU). This year, the team is focusing on the temple of Mut.

This is one of the three main temples within the complex and is dedicated to the holy triad of Thebes; the others belonging to Amun and Montu.

The latest news is their discovery of a beautiful statue of an unknown queen from the reign of Amenhotep III, a king of the 18th Dynasty circa 1417-1379 BC (possibly Queen Tiye, mother of the pharaoh Akhenaton, and wife of Amenhotep III).

Professor Betsy Bryan, with a team of JHU students and photographer Jay Van Rensselaer, arrived in Luxor, on January 2, for their eleventh consecutive year of excavations at Karnak.

But what is of further interest is that a day-by-day account is posted to the internet, along with images by Jay Van Rensselaer – see www.jhu.edu/neareast/egypttoday.html The webblog provides a refreshing change from stuffy academic accounts of digs and the fact that this is the sixth year that it is running shows how successful it has been.

Through the online diary you can get to know the students and live through their experiences in Egypt, many of whom are visiting for the first time. In addition, we get up to date information on the latest finds and background information on the site for the non-specialist. The site is addictive and I found myself going back day after day to catch up with the student’s latest news. Archaeological digs take note, this is a great way to get your message across.

A Dutch team from the Netherlands Foundation for Archaeological Research has uncovered what they believe are the remains of a large Middle Kingdom temple (c.1938-1759 BC), overlaid on the remains of at least a further five more temples dating back to around 3100BC. The discovery was made at the site of Tel Ibrahim Awad in the Eastern Nile Delta.

The number of temples built at the site, and the length of use of the complex, make this discovery significant and will hopefully contribute much to the understanding of the development of temple building in Ancient Egypt.

The work at the site is made difficult due to the high ground water, which requires the use of pumps to reach the earliest remains. However over a thousand ritual objects have been unearthed and are currently being studied by the team. Despite this, the gods or god worshipped at the site have not yet been identified.