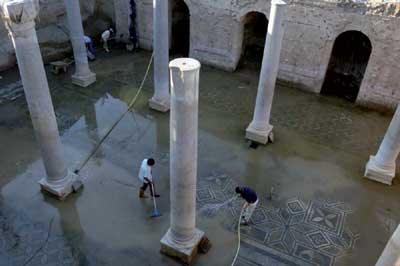 In CWA27, we highlighted the campaign to save the Roman site of Allianoi (in Izmir, Western Turkey), from imminent flooding. The situation is not yet resolved. Europa Nostra – the Pan-European Federation for Cultural Heritage – has now launched an urgent appeal to Mr Vicente Gonzalez Loscertales, Secretary of the Bureau International des Expositions (BIE) and to Mr Cahit Kiraç, Governor of Izmir, calling on them to intervene for the safeguarding of Allianoi.

We are now repeating their plea that if no urgent action is undertaken this exceptional archaeological site will perish as the result of the Yortanlı Irrigation Dam project. Europa Nostra’s appeal follows widespread opposition expressed by many Turkish experts and citizens’ associations and earlier appeals by the EU Institutions and international conservation organisations, including Europa Nostra, the EAA and ICOMOS. To date, their protests have succeeded in postponing the flooding. However, the site is currently being covered with clay. Once this is finished, it will be submerged. This inundation is to happen no later than April 2008 in order to catch the winter rains.

Yet so far only 20% of the site has been uncovered. Allianoi is therefore an inestimable source of knowledge about our common European history and culture. CWA, therefore, supports Europa Nostra’s call that the adequate excavation and documentation of the site be pursued without further delay.

Moreover, Izmir is one of the candidates for EXPO 2015 on the theme Health for All. A statue unearthed at Allianoi is even being used in the promotion campaign for Izmir’s candidacy. In this context, the Turkish Government’s plan to destroy Allianoi, with its Roman baths and its reputation as one of the prime healing centres of the ancient world, is rendered even more deplorable and unacceptable. EXPO 2015 could provide the opportunity and the necessary resources for saving Allianoi.

Allianoi possesses a great potential for its development as a high quality cultural and health tourism destination. As highlighted by Europa Nostra in previous messages to the Turkish Government, the benefits for the local population are likely to massively exceed those associated with the creation of an irrigation basin – thought to have an effective life span of no more than 50 years. A comparative study of the benefits from an alternative plan for the sustainable development of the region should therefore also be carried out.

The Special Scientific Committee, established in 2006 by the Turkish Ministry of Culture, has recommended a series of alternative conservation measures that could be undertaken before flooding the area. These include protecting the site by an earth wall or the relocation of some of the most important structures of the archaeological site. None of the measures has so far been applied, but Europa Nostra believes that there is still time to implement these if the political will exists.

This is a final plea to all our readers to get involved and save this spectacular Roman city. Please sign the web petition (www.europanostra.org/save_allianoi), or write a letter of appeal to Allianoi Campaign, Europa Nostra, Lange Voorhout 35, NL – 2514 EC, The Hague, The Netherlands. We can make a difference: since our publication of the appeal in CWA27, Europa Nostra has received a number of letters of support from CWA readers, and a particularly high number of signatures to their petition on the web-page. We need to help the Turkish Government see the merits of their country’s world-class gem. We can not let this site perish. Together, we can help save Allianoi.