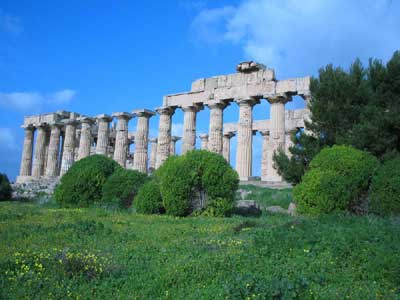 Sicily in January is warm and flush with North African breezes. Its landscape is already a soft green and brightly carpeted with flowers. Orchards opulently laden with lemons and oranges are to be found everywhere.

Even the almond blossom is appearing. Yet, Etna – the Pillar of Heaven, according to the ancient Greeks, majestically visible for fifty miles or more – is snow-covered and seeping a plume of murky smoke. The island is a divine place for any archaeologist, rich with the finest monuments and baroque towns. Its food, too, is peerless. Describing the fish served in the lightest of sauces and accompanied by delectable dry white wines would defeat my vocabulary. Only the tortuous roads and treacherous road signs – all of which seem to lead to Catania – demean the pleasure of visiting the islands’s great Greek and Roman sites. These, at least, have not changed since I carried out a small survey here exactly thirty years ago.

My first stop is Syracuse, or rather Ortygia. An article in The Times recently questioned whether this was the most beautiful town in the world. It certainly ranks with the most beautiful of Italy, pride of place being the Norman cathedral with its dazzling baroque façade, formerly the imposing Greek temple of Athena. Ortygia is a labyrinth of dark, small streets on an island beyond the undistinguished modern town The cathedral has been recently restored, as has its elliptical piazza formed of gracious baroque buildings. As it happens my visit coincides with the rare occasion when the city’s patron saint, St. Lucia, is displayed in all her silver finery in a side chapel of the cathedral.

Darkened by its Norman piers and Ionic Greek columns, the cathedral-temple is alive with whispering Siracusans. Of course, the main archaeological monuments lie on the north side of the present city, some distance from Ortygia.

The Greek theatre and stoa occupy a blissful hill slope beside the limestone quarries where once, so Thucydides soberly recounts, defeated Athenian sailors were put to work as slaves.

From this end of town, Syracuse’s huge natural harbour – one of the great anchorages of the Mediterranean – fully fills the seascape. Close by is the modern archaeological museum. Like much of Sicily’s cultural heritage, this belongs to a moment in the island’s affluence. The galleries are didactically stuffed with cases, almost overflowing with prehistoric and Greek objects – a bewildering volume of finds that essentially date from Paolo Orsi’s restless excavations at the turn of the last century.

Syracuse is one of many extensive Greek planned colonies along the south coast. The scale of each is simply extraordinary and must have sorely tempted the architects who dreamed them up. Known, of course, for their temples, it is the town-planning and awesome size which beckons our attention. I visited Kamarina, Agrigento, Eraclea Minoa and Selinute. But as the exhibition in Syracuse museum clearly conveys, there were many more cities and all slavishly followed Greek urban principles.

Plainly the wealth of the land before it was deforested, coupled with maritime trade, proved an irresistable incentive to the colonists who created new places much like the gridded cities of the Americas with their pleasure parks.

Almost every site has been excavated on a massive scale at one time or another, and each, as a result, has been awarded a museum – small in the cases of Eraclea Minoa and Kamarina, and immense in the case of Agrigento. These, too, are natural archaeological parks.

Overlooking the sea, in January each is blessed with flowers. Of them all, Eraclea Minoa, perched at the end of a pinched ridge between two arcing beaches, is a divine spot.

Closer inspection, of course, reveals that the Greeks left their imprint which with time was translated into an enduring history, with palimpsests of Hellenistic, Republican and even Byzantine dwellings. My favourite example of this was Selinute. Here Temple A collapsed in an earthquake upon a Byzantine street. Countless dwellings were crushed but their interior staircases to first-floors are still visible and bring to mind how it must have been to live in the shadow of such vaunting monumentality.

Despite the majesty of these sites, not all is well with their maintenance. The golden age of promoting, protecting and excavating these places was in the 80s. Today, the concrete bunker entrance hall at Selinute is rank with damp.

Kamarina was awash with flowers that prettily conceal the vestiges of buildings. Eraclea Minoa’s theatre is protected by such a tight temporary cover that the theatre beneath cannot be seen.

Every monument appears to be under restoration, flanked by scaffolding evidently made available for a good price. Indeed, conservation is becoming a feature: Agrigento’s great Temple of Concord is being restored beneath a shroud with a gaudily painted image of a temple that is illuminated at night! All these thoughts coalesce at the Roman villa at Piazza Armerina. The so-called ‘city of mosaics’ is most definitely not a city in the Greek sense. Quite the contrary: it is an extraordinarily tight ensemble of buildings deep in a ravine, with a view southwards to expansive rolling countryside. Half a mile of covered market stalls line the road approaching the villa.

Most are thankfully closed. Once inside, this world of tatty souvenirs is transformed by the serenity of the terraced olive groves. The villa is of course known for its sumptuous 4th-century mosaics purporting to depict life here, hunting and of course a room with eight women in bikinis. Yet it is the intimate nature of the place that fascinated me. A spacious entrance atrium beckons one into the porch and from there into the covered peristyle that draws one into a central garden with an elegant pond reminiscent of an Edwardian country-house. Looking across the pond, the huge columns surely taken from a Greek temple, entice one around to the far side and a pair of grandiose reception rooms. The columns signal the grandest of these; next to it is a more intimate set of reception rooms graciously concealed by a fountain. This intimacy of space is confused on the celebrated plan of the villa by an even grander reception room on the far side of the complex which possesses its own oval-shaped garden. This third room, I speculate, is a later, somewhat grandiloquent venture to upstage the earlier arrangement – a kind of 30s extravagant addition to a Lutyens’s turn-of-the-century gem.

Stand on the walkways here and cast your eye around these rooms with dazzling mosaics and sense how different Piazza Armerina was from the sprawling coastal towns. It was a jewel, masterminded by a pragmatic architect, adequate builders and first-rate mosaicists.

Of course, Piazza Armerina is covered by plexi-glass arranged to look like the upper portions of the villa itself. This bold concept must create a hellish heat in the summer compounded by the frustrations of the narrow walkways with single-file traffic. A plan is in hand, I hear, to re-model the cover. An unctuous ex-politician and television star is masterminding the campaign, it is said. If this is so, protecting the spirit of this place is as important as protecting its mosaics.

Was Piazza Armerina an imperial villa or the home of a procurator? Amazingly, even its exact date is not known. Why, you must wonder? Out on the rim of the distant hills, at the Statio Filosofiana, are the remains of its tied farming community. Buildings from the Republican period until the 13th century AD are jumbled together here, as at the great Sicilian site of Selinute, but in this case occupying a tract of land beside the old Roman road from Piazza Armerina to the south coast.

Unlike at Selinute, pictured above, the archaeology at Statio Filosofiana is hardly special.

Nonetheless, listening to the larks in the azure sky on a January afternoon, you appreciate how mesmerizing this expansive landscape was and in many ways still is. Already carpeted with flowers like mosaics, this island held a truly special place for the ancients, somewhere they could breathe freely and think and find the will to control the Mediterranean. Today two villagers are collecting chicory, taking advantage of the winter sun and the lush conditions to ensure the scope of the island’s cuisine is fully indulged.

One final stop: the Madonie Mountains where in 1977 I spent two weeks surveying in the environs of a Norman motte and bailey castle. Sicily was tough then. The hotels were spare and as unwelcoming as the food was memorable. Returning, it could not be more different: I overnighted at the Relais Santa Anastasia (near Castelbuono) – on an upper reach of the mountains, the hotel is a restored 12th century Benedictine monastery surrounded by tiers of vineyards. Only the sheep-bells before dinner and the mewing of buzzards at dawn mark the silence. January here, I muse, is like the island’s archaeology, extraordinary. Leaving is really very hard.