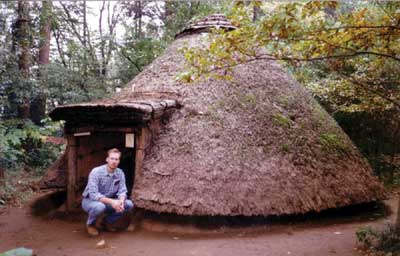 I was pleased to read the cover story of CWA 11, as it spotlighted a fascinating yet largely unknown area of archaeology, namely the Jomon period of Japan. I had the honour of studying this ceramic hunter-gatherer culture, which lasted from c.13,500 – 500 BC, under Professor Tatsuo Kobayashi of Kokugakuin University, and it was a memorable experience.

Yurugimatsu was the first site I worked on in Japan. Already an experienced field archaeologist, I initially found the tools and techniques of Japanese archaeology literally quite foreign to me. Given this, I thought that Yurugimatsu would serve as a good example to introduce CWA readers to some of the methods of Japanese field archaeology. Although the dig was several years ago now, the tools and techniques have not changed since then.

My timing in joining the excavation, organised by Funabashi City Archaeological Research Centre, was perfect, since a new trench was opened the very day I arrived. This gave me the opportunity to observe and participate in the whole Japanese excavation process from the start. Straightaway, I was handed a tool that I had never even seen before. Known as the Joren, it consisted of a D-shaped blade, the straight edge of which was sharp, attached at right angles to a meter long pole. My colleagues, a dedicated and experienced group of housewives and retired men, were likewise armed, and together we proceeded to remove the uppermost layer from the new trench, exposing the archaeological features. These appeared only as areas of slightly darker soil. The Joren, then, is a kind of mattock and pointing trowel rolled into one, but is far less cumbersome than the former and finishes the job much quicker than the latter. Moreover, unlike trowelling, using the Joren causes no discomfort to the knees.

I recognised another tool immediately from martial arts movies. This, the perilous-looking Kama (sickle), is used by Japanese archaeologists simply to cut sections.

Together with three others, I was tasked by the site director, Taro Shirai, with excavating a large oval feature. I asked him in Japanese what it was. Unfortunately, since I had only just started to learn the language I could not understand his detailed answer to my question. Luckily, the one lady who spoke English was in my team. She translated and summarised what he had said in just two words: ‘Jomon house’.

The pit-house produced a surprisingly large number of potsherds. Although I was allowed to remove and bag the smaller sherds, I was told to leave the larger sherds and any stone artefacts in place. This meant that as I removed the earth from the house pit, these objects became stranded on small towers of soil. These towers were not only difficult to work round, but were at the mercy of people’s feet and the weather. Unsurprisingly, some of them collapsed. The advantage of the Japanese method, though, is that the horizontal and vertical positions of all the objects can be recorded in one go, saving a considerable amount of time. Moreover, the objects can be photographed together, showing their relationship with each other and with the feature.

After the objects and their towers had been removed, we proceeded to excavate the 20 or so post-holes in the floor of the pit-dwelling. Although they were not arranged in any regular pattern, it was apparent that most were situated around the edge of the house pit, while the others encircled the central area. The simple circular hearth was located off-centre. All in all, it was a typical Jomon pit-house. In order to draw the plan of the house, I was instructed in the use of the plane table, which is commonly used to plan large features on Japanese archaeological sites.

About 20 pit-dwellings were found at the site. Although every one contained Middle Jomon pottery, they were not all occupied at exactly the same time, for some of the house pits overlapped. As a group, though, they formed a clear arc, and had more of the site been excavated a horseshoe of pit-houses might have come to light. Indeed, most Jomon settlements have a circular or horseshoe plan, with the pit-dwellings and storage pits arranged around a central plaza.

Yurugimatsu was a very enjoyable excavation, though not without its dramatic moments. A powerful typhoon washed a large part of the spoil heap back into the trench and an earthquake struck whilst we were digging one day. Thankfully, no one was hurt during the quake, and I could detect no damage to the buildings surrounding the site. The dig not only taught me much about the Jomon period, but equipped me with a practical knowledge of Japanese field archaeology which has served me well ever since.

I also dug on several other sites, and of all the objects that I have excavated myself in Japan, my favourite remains a pot of Kasori E type, which I found in a large storage pit at Yurugimatsu, a site of the Middle Jomon period (c.3500 – 2500 BC) in Chiba Prefecture.

Recent discoveries continue to enhance our knowledge of this unique culture. At Washinoki site, on Hokkaido Island, a stone circle of the Late Jomon period (c.2500 – 1200 BC) has come to light. Actually composed of three concentric circles of stones, it has a maximum diameter of 37m, making it one of the largest in Japan. Jade beads and a large number of clay figurines dating to the Final Jomon period (c.1200 – 500 BC) have been unearthed at Terashita site, Aomori Prefecture. At the other end of the Japanese archipelago, Higashi Myo, a waterlogged site of the Initial Jomon period (c.9200 – 5300 BC) in Saga Prefecture, Kyushu Island, has yielded a bounty of well-preserved wicker baskets.

With many thanks and best wishes to Professor Kobayashi, the staff of Funabashi-Shi Maizo-Bunkazai Centre, the Yurugimatsu excavation team, Simon Kaner and Masayuki Harada.