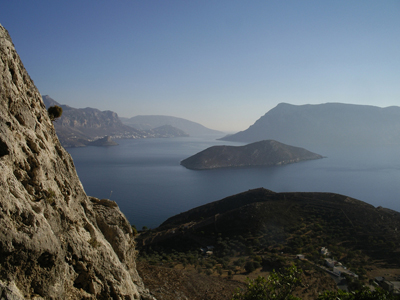 We live in a city-centric world. When we think of the scattered islands of the Aegean, we think of them as remote and peripheral, places of retreat where we can ‘get away from things’. To the Ancients it was not so. In the Bronze Age, the Islands and the sea-routes that linked them were the beating heart of their world – vital stepping-stones between two continents, Europe and Asia, and between two great seas, the Euxine (Black Sea) and the Eastern Mediterranean. At that time and throughout later Antiquity, the sea was of central importance – much richer in possibility than the dangerous and often infertile landmasses that bordered it.

From earliest times tiny, sea-girt Delos, in the middle of the Aegean, was the cosmopolitan heart of the Greek-speaking world, as well as birth-place of two of its greatest divinities: Apollo and Artemis. In the 6th century BC the island city of Samos was a bigger and more vital trading centre than Athens could then dream of being. Socrates, in his dialogue the Phaedo, put it in a nutshell when he implied that the Greek world was a pond scattered with frogs: the pond was the Aegean, the frogs the Greek cities. The frogs could never have existed without their pond – the life-giving expanse of water that united and separated them at one and the same time.

The Aegean world, once seen, is never forgotten. It is an extraordinary combination of mountains, winds, turbulent waters, idiosyncratic vegetation, and brilliant light; and it has created a way of thinking, of living, of perceiving the universe, which is quite unlike that of the other great cradles of civilisation – the calm, fertile valleys of the Euphrates, the Tigris, and the Nile. I spent over six years of my life walking the islands of the Aegean – all 70 of them: the inhabited ones, at least. Yes, I certainly felt compelled by that divine and majestic landscape. But it was also because I sensed that our reading of Greek history, and therefore of early Western civilisation, was skewed unnecessarily towards the centres of mainland Greece.

Nobody would sensibly deny the huge importance and achievements of Athens; but should we, by the same token, overlook the contributions to the arts and sciences, and to the evolution and thinking of the Hellenic world, of Lesbos, Samos, Naxos and Paros in the 7th to 5th centuries BC, or of Cos and Rhodes in the 5th to 3rd centuries BC? Up until only a few decades ago, the Islands were difficult to visit, and remained unexplored and little understood for that reason. It is time to redress the balance.

My personal marathon of walking, sailing – sometimes climbing, and even swimming – this remarkable island-world began with a commission to write a brand new Blue Guide to the Aegean Islands. ‘Four hundred pages’, the publishers said. I began with Kythera; then Chios, Thasos, and Samothrace. Already there were nearly 250 pages of material. By the time I had completed the book there were over 1,500 pages, and my publishers had lost hope. But the full text has now appeared in 20 small volumes covering individual islands or small island groups.