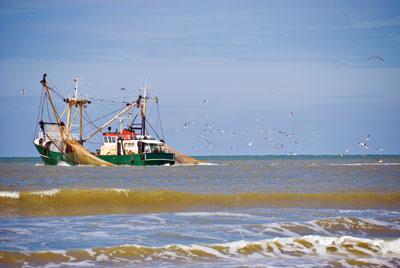 Captain Francesco Adragna was ready to give up on the day’s poor catch when his nets dragged up a piece of rusting bronze, about 50 miles (80km) off Sicily. The crew of the Italian fishing boat Capitan Ciccio nearly threw it back overboard but the skipper decided to keep it as a souvenir. When the rest of the bronze turned up several years later, off Mazara del Vallo, he was glad he did: Adragna had snagged the lost 4th-century BC Greek masterpiece of a dancing satyr – one of the finest ancient statues ever found. Local celebrity status and a handsome finder’s fee from the government followed, and his discovery was the star attraction of the World Expo exhibition in Japan.

This story conceals a significant problem: the greatest threat to the museums of the deep is not Mother Nature, treasure hunters, or offshore oil pipelines. It is the quest for fish. Each year, trawlers rake over ocean floors as large as Brazil, the Congo, and India combined, flattening almost everything in their path. This traditional and essential industry annually brings in 80m tons of fish valued at $93.9bn, landed from 4.3m vessels, and employs 44.9m people worldwide. Fishing is big business.

For decades, the effects of these bulldozers of the deep have raised red flags among marine ecologists, but only now has the conundrum emerged on the radar of underwater archaeologists. No legislation guides trawlers on how to avoid historical shipwrecks, and no environmental schemes monitor the scale of discovery and destruction. So, is the resulting loss of human knowledge an acceptable casualty? And what is its true scale?

Paying the price
The effects of trawling have been known ever since John Pownall banged on the wind-battered door of a small cottage in the fishing village of Whitstable, southern England, in 1773. Pownall was Commissioner of Excise, and word reached his office that ‘in dredging for oysters after tempestuous weather’ two to three dozen pots were being snagged in fishermen’s nets every year. Making perfect dessert bowls, the villagers called the underwater site six miles to the north-east ‘Pudding Pan Rock’.

The pots were stamped with the Latin names of their makers: ALBVCINI, CARETI, and SEVERIANI, and antiquarians quickly realised that this bonanza came from the first Roman wreck found off Britain. At least 250 examples are known today, but the original number – broken, thrown over the sides of oyster boats, or kept for pudding pans in Whitstable – is anyone’s guess. Certainly, modern exploration by the British Museum and Southampton University failed to find a single surviving shred of this stripped heritage.

Across the ‘pond’, the New York Times warned of the dangers when dredging for oysters in Chesapeake Bay as early as 18 November 1906: ‘the timbers catch the dredge, and the iron handles of the windlass are thrown back on the heads of the winders, and many a man has been killed by the stroke of the iron on his head. Finding a “hang” is dreaded more than anything else.’ A two-pounder iron cannon and canvas bag of iron shot dragged up in the nets of the Decco 7 fishing boat 45 miles (72km) off the mouth of the Chesapeake hint at the history found and destroyed.

The odd cannon or Spanish olive jar inadvertently netted and then reported to authorities or donated to a museum is the acceptable face of a scientifically and economically rich vein of archaeological remains that mostly go unrecorded, and betray the reality of worldwide destruction. Museum-quality statues trawled off ancient wrecks across the Mediterranean Sea represent the high-end artefacts hauled up from the deep.

Among numerous examples is a colossal head of the Roman Emperor Augustus, sculpted in Luna marble, caught off France in an oyster dredge in the RhÙne delta. A life-size Greek masterpiece of a victorious youth, dated between 300 BC and 100 BC, turned up in an Italian trawl net off Fano in the northern Adriatic Sea in 1964. It is now the subject of a bitter legal tug of war between the J Paul Getty Museum, which bought it for $3.95m in 1977, and the Italian courts.

The volume of artistic masterworks lost to trawling is unthinkable, but the rare bronze ram of a war galley decorated with the head of Medusa found by a fisherman off Sanary, France, in 1877 and sent to a foundry to be melted for scrap, is a sorry marker for the fate of many artefacts.

Statues may be the most dramatic examples of trawled underwater cultural heritage, but the range of finds is spectacular and disturbing. Nobody was more amazed than Jerry Murphy when his butterfish trawler, 50 miles (80km) south of Louisiana, pulled in its haul and it started to rain silver coins. The boat had inadvertently disturbed the remains of the El Cazador, a Spanish brig-of-war sailing from Vera Cruz to New Orleans in 1784 with 450,000 pesos. Salvors went on to lift 5.5 tons of coins.

Since the 1920s, everything from Mesolithic bone tools to a 16ft-long (5m) Anglo-Saxon dugout canoe have been snagged off the United Kingdom. Elephant tusks brought up by the fishermen of Potrieux inspired stories of an underwater cemetery of mammoths submerged off Brittany, but which eventually proved to originate from a possible Dutch wreck lost off Saint-Quay-Portrieux between 1711 and 1750.

A hoard of 4,000 4th-century AD bronze coins was fished up in an amphora off Livorno in Italy. Thousands of amphoras ranging from the Late Bronze Age to the Crusader period have been plucked from the offshore waters of Turkey and Israel.

Rather than be dismissed as curiosities, accidental discoveries should help new sites be recorded and protected – ‘canaries in the coalmines’ that warn of whole-scale destruction. Once a delicate hull has been struck, the wreck suffers an ever-diminishing level of preservation, and isolated cultural catches become divorced from their wreck contexts.

Assessing the damage
For over a hundred years prehistoric bones have been coming up in nets off Doggerland, a prehistoric landmass sunk c.6000 BC, some 56 miles (90km) off eastern Britain. The University of Birmingham’s geophysical mapping of nearly 8,800 square miles (23,000km²) of this flooded land concluded that beam trawlers may scrape an estimated 57 tons of faunal remains off the surface of the seabed every five years. Most finds are dumped without being recorded, or are sold on eBay.

Over the last decade, Dutch trawlers fishing the English Channel and North Sea have brought 50 cannon weighing up to 2.3 tons each into the Netherlands. A further 18 snagged bronze guns may be associated with the Battle of Lowestoft of 1665. By extension, since 1970 an estimated 200 cannon minimum may have been inadvertently fished up in Dutch nets alone, a number that does not include English, Belgian, and French catches.

Expressing concern about the severe damage that towed bottom-gear inflicts on delicate hulls is no scaremongering. Just a single pass by the Ho Bugt trawler across a wreck lost between the islands of Mando and Fano in Denmark’s Wadden Sea dragged up a 13ft-long (4.05m) keelson and mast-step, an 8ft (2.55m) floor timber, and two more 6ft 6ins (2m) planks. Fortunately, this extremely rare wreck, dated by dendrochronology to 1264, was declared to the Fisheries and Maritime Museum in Esbjerg – and the trawler even joined in subsequent surveys.

The same hull-stripping is happening across the oceans. The Stirling Castle, lost off the Goodwin Sands during the great storm of 1703, is England’s best-preserved shipwreck and was first identified when a stern trawler struck a ‘fastener’ in 1979. More recently, after gillnetters were blown off course by currents and winds, planking was found to have vanished, including a 20ft (6m) two-ton transom timber.

In America’s Stellwagen Bank National Marine Sanctuary, an 842 square miles (2,190km²) protected marine zone at the mouth of Massachusetts Bay managed by the National Oceanic and Atmospheric Administration (NOAA), fishing gear has had an impact on nearly every historic shipwreck. Further afield, off Peninsular Malaysia, the ‘Wanli wreck’ of c.1625, a Portuguese carrack transporting at least 37,300 pieces of Chinese porcelain, came to light after pottery surfaced in trawler nets. And in the same waters, the Desaru shipwreck was discovered when a bottom trawler twice snagged its nets and recovered pottery sherds and timber dated to the 1840s.

When dived by Nanhai Marine Archaeology, the site was found to have been ‘shaved flat’. Despite the subsequent placement of a hazard warning buoy over the site, trawlers returned within a year, transforming the area into a field of broken planks and misplaced bulkhead frames. With a typical relief of less than 1ft 8ins (50cm) above the seabed, most trawlers mistake sites of cultural importance as natural geological outcrops, and have absolutely no idea about the knowledge under threat.

Catching up with land archaeology
In July 1870, General Pitt-Rivers wrote in the Saturday Review about plough damage to the Iron Age oppidum of Dyke Hills, Dorchester, where ‘at least a third of the dyke has already been lowered, and will gradually be utterly destroyed beneath the yearly passage of ruin’s merciless plough share’.

His concern contributed to the creation of Britain’s first Ancient Monuments Act in 1882. Despite the availability of cutting-edge technology in marine archaeology (Remotely Operated Vehicles, Autonomous Remote Vehicles, multibeams), awareness of the effects of fishing on underwater cultural heritage stands where ploughing on land languished in 1870.

Almost 240 years after John Pownall chased down England’s first Roman wreck off Pudding Pan Rock, a small chink of light glimmers at the end of a long tunnel. Warning buttons are starting to be pressed and action considered. Former President of the Institute of Nautical Archaeology at Texas A&M University and current Director of NOAA’s Maritime Heritage Program, Professor James Delgado, advises: ‘the world’s greatest “museum” rests at the bottom of the sea, and it is under an unparalleled assault that makes the looting of the National Museum in Baghdad, or the Taliban’s demolition of the Buddhas of Bamiyan in Afghanistan, pale in comparison. Every day deep-sea trawlers smash through shipwrecks… We cannot afford to simply stand by, nor can we blindly hope that opposing trawling or regulating it will solve the problem.’

Finding a solution
So what is the solution? In December 2011, the tenth anniversary of the signing of the UNESCO Convention on the Protection of Underwater Cultural Heritage, technology was presented as one answer. Microchips built into bottom-fishing gear used to warn authorities of illegal intrusions into marine parks could be transferred to exclusion zones built around ‘geofenced’ shipwrecks. Meanwhile, SumWing technology, undergoing trials in Holland, relies on a self-steering foil and lighter bottom gear installed with an electronic tickler system that may decrease bottom contact by up to 84% – but may also electrocute catches en masse.

For now, no magic bullet can counter the threat to the world’s underwater cultural heritage from fishing. Protection will only be achieved through national legislation initiatives or advisory publicity. An obvious, if unpopular, solution would be to tax the already hard-pressed fishing industry through the recognised ‘polluter pays’ path, to generate a monetary war chest to monitor trawl catches, promote awareness, and record and save a small percentage of the most important shipwrecks.

Today, fleets steam increasingly further offshore in search of ever-decreasing stocks under extremely harsh conditions for traditional fishermen. Where this maroons wrecks of global significance sunk in international waters and not subject to proactive national legislation is a labyrinthine legal concern. Regrettably, through no conscious fault of the innocent fisherman earning his daily bread by servicing the planet’s dietary needs, great and irreversible damage has already been done. In the space of a few generations, some seas have witnessed the mass wiping of their ancient hard-drives, leaving behind a legacy to future generations of archaeological amnesia.