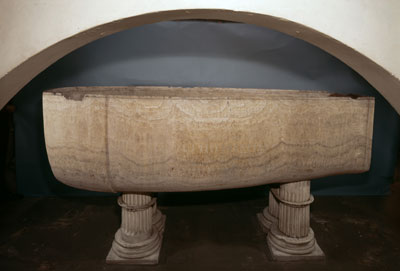 This magnificent alabaster sarcophagus comes from the tomb of the 19th Dynasty pharaoh Seti I. It was discovered in 1817 by Giovanni Belzoni, a flamboyant Italian Egyptologist – and former barber, circus performer, and hydrologist.

Belzoni discovered the intricately carved coffin during his excavation of Tomb KV17 in ancient Thebes, now known as the Valley of the Kings, and brought it back to London for a special exhibition in May 1821 at the Egyptian Halls in Piccadilly.

After the exhibition the sarcophagus was stored at the British Museum until 1824 when the museum turned its nose up at the £2,000 price tag, and it was snapped up by the architect John Soane in 1824 for his private collection. On his deathbed, Soane bequeathed his home and possessions to the British nation, to protect them from his wayward sons. Seti I’s sarcophagus can be admired in a special basement room of the museum to this day.

Cut from a single colossal slab of white stone, since darkened to a pale sandy colour, the 10ft-long (3m) sarcophagus becomes translucent when a lamp is placed within it. The sides, both inside and out, are covered with inscriptions – once inlaid with blue copper sulphate – giving Seti’s royal titles and passages from the Book of the Gates, a guide to the journey of the dead man’s soul through the underworld. On its base is a full-length portrait of the goddess Nut, the deity who represents the sky and often portrayed studded with stars, arching over the earth below her.

The sarcophagus was discovered before Jean-François Champollion had made his historic breakthrough in deciphering hieroglyphs, so several erroneous interpretations of the symbols led to confusing attempts to identify its owner: Belzoni first thought it belonged to the sacred bull Apis, because he found the embalmed carcass of a bull in one of the chambers of the tomb; and then to a non-existent pharaoh called Psammis – based on earlier attempts to decipher hieroglyphs by a young linguist called Thomas Young. It was Champollion who finally decoded the name of Seti I.

Pharaoh Seti I
Seti I was pharaoh for about 11 years until his pre-mature death in 1279 BC. During his reign, he consolidated control in Egypt and its neighbouring territory following the turbulent years of the 18th Dynasty that saw Akhenaten’s failed attempts at radical reform. Though a successful military king, whose campaigns are recorded on the front of the temple of Amun at Karnak, Seti I is probably best known for being the father of Ramesses II (Ramesses the Great).
See Amara West for a glimpse of life in Nubia during this period.