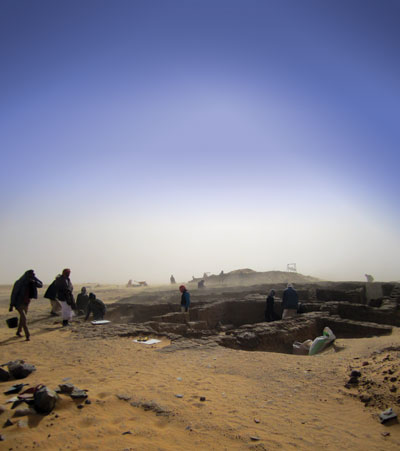 What was life like under the shadow of the pharaohs? Neal Spencer is leading the British Museum’s excavations in the sand-swept capital of a conquered land: Amara West in Upper Nubia was the administrative centre of the Kingdom of Kush under Egyptian rule.

During the great imperial age of the Ramesside pharaohs (c.1307-1070 BC), Egypt’s empire stretched from what is now Syria to northern Sudan, and with considerable influence beyond. Temples were decorated to emphasise complete Egyptian control over the known world: scenes of orderly Egyptian troops, led by pharaoh in his chariot, are shown overwhelming unfortunate enemies, be they Libyan, Near Eastern, or Nubian. Accompanying texts describe battles and campaigns – always victorious – and highlight the lowly character of Egypt’s neighbours and foes. Nubia had been reconquered by Egypt around 1500 BC, and would remain part of the empire until c.1070 BC. Its inhabitants were described ignominiously as ‘not people one respects, they are wretches, with vanquished hearts’.

Amara West, in modern northern Sudan, was first excavated in 1938-1939 and again in 1947-1950 by the Egypt Exploration Society, who uncovered well-preserved houses, storage facilities, a decorated sandstone temple, and parts of the cemeteries. Perhaps the most important discovery was a large building near the West Gate, in which parts of decorated sandstone doorways were found. The inscriptions named several holders of the title ‘Deputy of Kush’ – the senior administrator for the occupied territory of Upper Nubia – suggesting Amara West was the administrative centre of Kush from the reign of Seti I (1290-1279 BC) onwards.

In 2008, the British Museum began a major research project at Amara West. The preservation of both a town and its cemeteries – increasingly rare in the Nile Valley – offers great potential.

While the previous excavators had focused on the decorated temple and the house architecture, we wanted to find out more about the actual community who lived, worked, and died in Egypt’s Nubian empire. How did the rhetoric and ideology of the pharaonic texts and depictions compare with the archaeological evidence of everyday
life? How did individual households organise their living spaces? What did they eat? Were they healthy? What can we learn about their lifestyles?

Egyptians or Nubians?
The rhetoric and iconography of the ancient Egyptian engagement with Kush was one of complete domination – ‘vile Kush’ is a common phrase in the inscriptions. Increasingly, colonial encounters are seen more as ‘entanglements’: intermarriage, cultural permeability, and shifting identities are typical products of such environments.

In the town at Amara West, the architecture of the town (and indeed the bombastic scenes of victory on the gateway and in the temple) was unmistakeably Egyptian, as were the majority of the objects made and used by the inhabitants. But the town was far from homogenous: up to 10% of the ceramics are handmade Nubian vessels, nearly all cooking pots.

This could reflect important approaches to food preparation and consumption, though the faunal and botanical evidence is, at this preliminary stage of analysis, broadly consistent with that in contemporary Egypt, including cultivation of barley and emmer. Petrographic and chemical analyses of pottery fabrics are providing important insights into which pots were made locally, and which were brought from Egypt. Between the west gate of the town and a villa in the southern neighbourhood, we uncovered an oval building in the centuries-old architectural tradition of Upper Nubia, similar to buildings in the earlier Nubian capital of Kerma. As yet, we have not determined its purpose – possibly a house or a chapel, or even simply for food-processing – but whoever built it chose not to build an Egyptian-style building.

The cemetery, too, echoes the cultural admixture present at Amara West. But Amara West was part of a much wider world, as proved by the discovery of both Mycenaean stirrup jars and of Egyptian imitations of them.

But what did it mean to be ‘Egyptian’ or ‘Nubian’? Beyond the administrative apparatus, and even the supply of certain commodities from Egypt, how much did this matter? The majority of the town’s inhabitants were probably part of families who had settled here generations earlier, as Upper Nubia had been under pharaonic control from 1500 BC.

Living it up
Magnetometry survey during the initial season revealed a previously unknown ‘suburb’ of large villas that extended west of the town: clearly, the inhabitants did not feel the need to shelter within the ostensibly defensive walls, suggesting Upper Nubia was largely peaceful under Ramesside rule.

The excavation of one villa showed how the inhabitants were keen to express wealth in the much the same way as their contemporaries back in Egypt. This large mudbrick house (397m²) featured an imposing stone door, an open-air courtyard, a set of rooms for food preparation, alongside more secluded reception rooms and a master bedroom towards the back of the house. In keeping with practice in Egypt itself, the number of grinding stones, bread ovens, and storage bins suggest more was being stored and prepared than needed by the inhabitants. Under the floor of one room we found an ostraca – a piece of broken pottery used as a writing surface – bearing a passage from The Teaching of Amenemhat, a literary text in which the deceased king advises future rulers. This discovery shows that some at Amara West were enjoying reading and copying what was by then a 500-year-old classic! The stratigraphy beneath the villa showed that this extramural area developed late in the town’s history, perhaps prompted by a desire for some inhabitants to escape the increasingly cramped confines of the walled town.

A house divided
The main excavation area in the last four years has been inside the town, immediately north of the official residence of the Deputy. A fascinating picture of a neighbourhood developing across two centuries is emerging: at several phases, buildings were levelled, and new ones constructed on a different layout, suggesting a plan to modify the urban layout. The area changed from one of large storerooms – possibly associated with the Deputy – to a dense conglomeration of contiguous houses.

On a smaller scale, internal arrangements within these houses were repeatedly reworked to meet changing needs. The excellent preservation of the architecture – often nearly 2m in height – allows a good understanding of space, and from the installations and artefact assemblages we can work out the functions of different rooms.