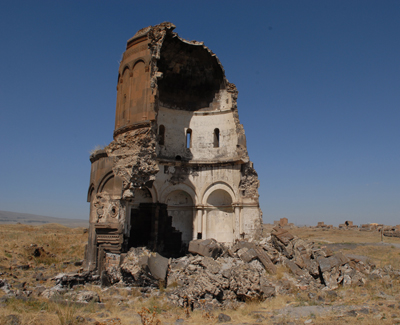 Nearly 200 of the world’s major archaeological and cultural sites are defined as being ‘At Risk’ or ‘Under Threat’ according to a newly published report from the San Francisco-based Global Heritage Fund (GHF), while 12 are ‘On the Verge’ of irreparable loss and destruction. Those most at risk include the site of the ancient Assyrian city of Nineveh, with its endangered bas reliefs, the ancient Greek and Medieval port town of Famagusta, in eastern Cyprus, the ancient Greek city of Chersonesos in Ukraine, the Black Sea’s largest classical archaeological site, and the historic city of Intramuros and Fort Santiago in Manila, the capital of the Philippines.

The GHF’s report, Saving Our Vanishing Heritage: Safeguarding Endangered Cultural Heritage Sites in the Developing World, assesses the condition of the planet’s 500 most threatened and significant cultural sites in 150 countries. The survey is part of the GHF’s campaign to persuade governments and international aid agencies to invest in heritage – not just for the sake of heritage itself, but as a key part of the UN’s aim of eradicating global poverty.

Figures quoted in the report show that spending on conservation pays back many times over in terms of cumulative economic value when jobs, skills, regional growth, tourist revenue, and foreign exchange earnings are taken into account. Even in their less than pristine state, the 500 global heritage sites analysed in the report earned US$24.7 billion in 2009 from domestic and international tourism. Investment in conservation now could help drive tourist income up to US$100 billion per year.

The report is thus far from pessimistic: even in describing the looting, neglect, conflict, and development forces that challenge the very existence of the 12 global heritage sites described as being ‘On the Verge’, the report’s authors say these same sites ‘offer the promise of being economic engines for their regions and communities if restored and managed responsibly’.

This requires a multinational effort, and the report concludes with a call for the establishment of a ‘Global Fund for Heritage’, with contributions from governments, foundations and corporations that will be used for emergency intervention, training and conservation, specifically focused on the lowest-income countries and regions of the world.

Founded in 2002, the Global Heritage Fund has a strong track record in raising funds for community-based, responsibly managed conservation and heritage tourism in the developing world, having secured US$38 million in co-funding for 16 global heritage sites. The organisation’s mission is summed up by Ian Hodder, one of GLF’s founders, who describes heritage sites as ‘the basis for scientific and aesthetic inquiry’ – but also as ‘important economic assets for sustainable development’, a view shared by the 24 experts from the World Archaeological Congress, the Archaeological Institute of America, ICOMOS (International Council on Monuments and Sites), Stanford University, the University of Pennsylvania, University College London, and others who formed the report’s steering group.

They concluded that heritage and conservation should be a core component of international development strategy. Tourism to heritage sites in many developing countries already generates more foreign revenue than any other industry, and an estimated 39 per cent of all international travel is heritage related.

Despite these opportunities, says Jeff Morgan, Executive Director of GHF, ‘funding for preservation remains anaemic. Current funding for heritage conservation from major foundations and corporations is a fraction of what is needed. Less than one percent of total US philanthropic funding today goes to domestic cultural heritage preservation, and international support is less than 10 percent of domestic giving.