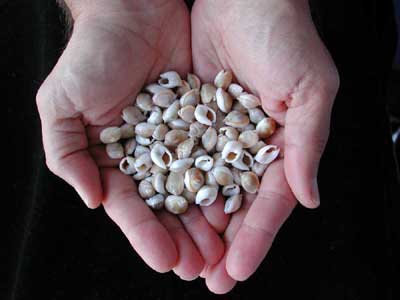 According to the Biblical story of Eve, self awareness is what made us human. New research indicates that self-adornment does indeed seem to be an archaic human trait – and far earlier than previously recognised. It now appears that humans have been draping themselves with jewellery at least 25,000 years earlier than previously thought.

Fresh analysis of beads made from seashells, led by Dr Marian Vanhaeren from University College London, reveals that the beads date from between 100,000 to 135,000 years ago – which is much earlier than a recent significant find of beads excavated in South Africa that date from 75,000 years ago. Vanhaeren and colleagues from the UK, France and Israel used elemental and chemical analysis tore-examine the shell-beads from two sites originally excavated in the early half of the 20th Century: from a Middle Palaeolithic site at Es-Skhul, Mount Carmel, Israel, and from the type-site of the Aterian industry, of Oued Djebbana, Bir-el-Ater, Algeria. Such personal ornaments, along with art, are generally considered as archaeological proof of an aptitude for symbolic thinking. Though human remains excavated from Ethiopia demonstrate that Homo sapiens in Africa had become anatomically modern (like us) 160,000 years ago, debate continues over when and where we humans first became behaviourally modern. Consequently, these new findings have major implications for the debates about the origins of behaviourally modern humans.

Dr Marian Vanhaeren, of the AHRC Centre for the Evolutionary Analysis of Cultural Behaviour, UCL Institute of Archaeology, observes that, ‘The main challenge for palaeoanthropology is establishing at what point in human evolution this ability developed”.

Traditionally, it was thought that anatomically modern humans became ‘modern thinkers’ only around 40,000 years ago. However, this was already challenged back in 2004 when engraved ochre and Nassarius kraussianus seashell beads bearing human-made perforations and traces of use were discovered at the Blombos Cave, South Africa, and were dated to 75,000 years ago. This discovery suggested that humans became behaviourally modern much earlier than previously thought, but this has been hotly contested because of a lack of corroborating evidence from other sites.

In the case of the Es-Skhul and Djebbana sites, remoteness from the seashore – up to 200 km in the case of Oued Djebbana – and detailed comparison to natural shell assemblages, indicates in both cases there was deliberate selection and transportation by humans of Nassarius gibbosulus seashells for symbolic use. But why were our ancestors interested in such beads? Dr Vanhaeren explained “Personal ornaments have many different – and often multiple – functions. They may be used to beautify the body, function as ‘love letters’ in courtship, or as amulets that express individual or group identity. The function of the oldest beads in Africa and Eurasia were probably different because in the African example we have only one bead type and in the Eurasian sites a rich variety of types”.

“We think that the African evidence may point to the beads being used in giftgiving systems which function to strengthen social and economic relationships. The European evidence suggests the beads were used as markers of ethnic, social and personal identity.” Finally, the researchers find it significant that the same shell species were unearthed at distinct geographical sites.

Could this, they hazard, suggest that a very early symbolic tradition extended across the Eastern and Southern Mediterranean? It certainly supports the hypothesis that a widespread tradition of beadwork existed in North Africa and the countries of Western Asia well before the arrival of Anatomically Modern Humans (us, again) in Europe at around 40,000 BP. Dr Vanhaeren said ‘This is an ongoing project and we are now assessing the evidence for early personal ornament at other contemporary sites”.